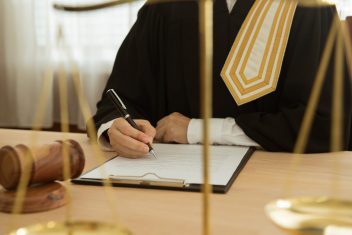 At the same time, a Missouri appeals court overturned the $55 million ovarian cancer verdict on jurisdictional grounds. The court cited a 2017 U.S. Supreme Court ruling that limited where lawsuits can be brought.

The cases are among the growing number of talcum powder lawsuits. Some people are suing because they developed mesothelioma after exposure to asbestos in cosmetic talc products. Thousands of other lawsuits involve women who blame talcum powder for their ovarian cancer.

The award comprises $37 million in compensatory damages and $80 million in punitive damages for Stephen and Kendra Lanzo. A jury handed up the verdict in May in a courtroom not far from Johnson & Johnson’s headquarters.

Stephen Lanzo, a banker, claimed his lifelong use of the baby powder caused his mesothelioma. Mesothelioma is a deadly cancer that is caused almost exclusively by exposure to asbestos.

Johnson & Johnson adamantly denies that its cosmetic talc products contain asbestos. Lanzo’s lawyer, Moishe Mamon, accused the company of purposely using tests that wouldn’t detect the asbestos and taking other steps to cover up the problem. He argued that the company put its profits ahead of consumers’ lives.

South Dakotan Gloria Ristesund was awarded $55 million in a 2016 trial in Missouri. She said she used Johnson & Johnson’s talc-based products for feminine hygiene for 40 years. A doctor diagnosed her with ovarian cancer in 2011. She underwent a hysterectomy.

A jury found Johnson & Johnson liable for her Ristesund’s injuries and guilty of hiding the risks. But last week, an appellate court said the lawsuit was improperly filed in Missouri.

Ristesund was not a Missouri resident, and Johnson & Johnson was not headquartered in that state.

A 2017 Supreme Court ruling restricted where someone can file a lawsuit. But a lower court judge has allowed other ovarian cancer cases against Johnson & Johnson to move forward by establishing jurisdiction through other evidence.

Ristesund’s attorney had asked the appeals court to allow the plaintiff to present evidence of jurisdiction. But the court said it was too late for that.