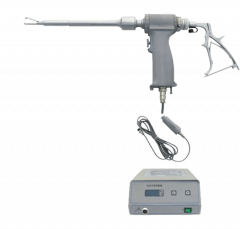 Morcellators are used in minimally invasive surgery to remove fibroids from the uterus or to completely remove the uterus in a hysterectomy. They use rapidly spinning blades to tear tissue into tiny pieces that can be removed through a small incision. But if they hit an undetected cancer tumor, they can spread the cancer and make it more difficult to treat.

Power morcellators do not cause cancer, but they can spread it inside the abdominal cavity. This is the part of the body that contains the intestines, liver, kidneys, reproductive and other organs.

The U.S. Food and Drug Administration estimates that approximately 1 in 225 to 1 in 580 women who undergo surgery for uterine fibroids have undetected uterine cancer. Studies have found that a hidden uterine sarcoma may be present in roughly 1 in 350 women who undergo a hysterectomy or myomectomy.

When the spinning blades of a power morcellator hit these cancer tumors, it can tear them into tiny pieces and spread the cells like seeds through the area around the surgical site. These cells effectively take root and can grow into new tumors. This significantly reduces the patient’s chances of long-term survival.

When power morcellators spread uterine cancer, it often isn’t detected until it has advanced to later stages and is difficult to treat.

Leiomyosarcoma is one of the more serious types of uterine cancer these instruments can spread. It is particularly deadly and aggressive.

According to the FDA, a leiomyosarcoma may be present in an estimated 1 in 495 to 1 in 1100 women who undergo surgery for uterine fibroids.

This type of soft tissue sarcoma is most common in the uterus, abdomen or pelvis. Left untreated, it can spread through the bloodstream, affecting the lungs, liver, blood vessels or any other soft tissue in the body.

MRIs, CT scans and even biopsies are not 100 percent reliable in detecting these hidden cancer cells. But, endometrial cancers are easier to find than more aggressive forms like LMS. Before undergoing surgery, women should have a biopsy of the uterine lining.

In a pivotal study by Dr. Jason D. Wright and colleagues published in the September 2014 issue of JAMA, the authors stressed the importance of screening hysterectomy or myomectomy patients for any history of cancer before laparoscopic power morcellation. Women with any history of cancer should not undergo this type of procedure.

Anita Austin had laparoscopic power morcellation surgery to remove a uterine fibroid. Doctors told Austin that the procedure would be less invasive and she would recover faster, but they did not inform her of the cancer risk, even though she had previously had thyroid cancer. The cells in her uterus were only Stage I, but the procedure seeded the cells all over her abdomen, effectively advancing the cancer to a higher stage.

“The big issue for me is that no one mentioned cancer,” Austin told Fred Hutch News, “Not at all. And I question things. I’d had thyroid cancer [in the early ‘80s], and I would have probably done something different. Given my history, honestly, I should have been advised not to do it.”

“The big issue for me is that no one mentioned cancer.”

Frequently, LMS is diagnosed post-surgery after pathologists examine tissue samples. Unfortunately, if one of these instruments was used to extract that tissue, the hidden cancer may have spread, becoming metastatic LMS.

Treatment for LMS typically involves a combination of surgery, chemotherapy and radiation therapy.

Survival and Spread of Cancer

How Many Women Survive 5 Years or More After Uterine Sarcoma Diagnosis?

When doctors diagnose cancer after morcellation, it is typically stage III or IV — a very advanced stage with poor prognosis. A tumor is considered stage IV when it has spread to the lymph nodes, bladder, rectum and/or distant organs. Some patients had LMS spread to their spine or lungs.

Symptoms that could signal upstaged cancer after morcellation include:

If tumors affect other organs or bones such as the spine, symptoms could include back pain or nerve issues.

In addition to the risk of spreading cancer, surgery with one of these instruments has other risks as well. The devices can even scatter noncancerous fibroid tissue. This can attach to other tissues and organs in the abdominal cavity, causing more fibroids to grow.