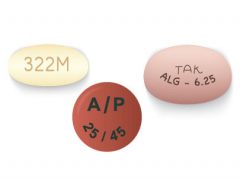 Nesina, Kazano and Oseni are Type 2 diabetes drugs with active ingredients linked to serious side effects. These drugs belong to a class of drugs called dipeptidyl peptidase-4 (DPP-4) inhibitors. Takeda Pharmaceuticals America Inc. makes these drugs and refers to them as the Nesina family of medications because they all contain the main active ingredient alogliptin.

The U.S. Food and Drug Administration originally denied alogliptin’s drug approval in 2009 because it did not have sufficient cardiovascular data. After it approved the drug in 2013, the agency required Takeda to conduct additional studies. These postmarketing studies were intended to monitor liver abnormalities, pancreatitis and hypersensitivity reactions as well as the drug’s safety in children, according to ACP Diabetes Monthly.

Nesina’s Common and Serious Side Effects

Researchers gathered data from 14,778 patients with Type 2 diabetes to conduct clinical trials, according to the Nesina medication insert. The average age of trial participants was 58 years old and they used the medication for 49 weeks. About 3,348 patients used the drug for more than a year. The trials allowed researchers to compile data about the most common side effects associated with the drug. In these trials, common side effects were those that occurred in 4 percent or more of trial participants.

According to the Nesina website, the most common side effects include:

The majority of side effects found in clinical trials were not serious. But after the medication hit the market, the FDA and Takeda began receiving reports of previously unidentified adverse events.

From 2010 to Sept. 30, 2018, the FDA received 583 reports of Nesina side effects, according to the FDA Adverse Events Reporting System (FAERS) Public Dashboard. Of these reports, 461 cases were serious and included 53 deaths. Pemphigold accounted for the most reported cases, followed by acute pancreatitis and interstitial lung disease. People also reported gastrointestinal issues such as nausea.

Takeda’s Nesina website warns several side effects may be fatal or require hospitalization.

Alogliptin may cause the following serious side effects:

After taking medications containing alogliptin, people reported cases of acute pancreatitis, a condition where the pancreas becomes inflamed and swollen. In severe cases, this can lead to hospitalization and even death. Six patients treated with Nesina and two patients who took a placebo or other diabetes drug suffered pancreatitis in clinical trials, according to data in the drug’s insert.

The National Institutes of Health reports alogliptin has been “linked to rare instances of acute pancreatitis.”

A 2017 commentary by J. Hans DeVries and Julio Rosenstock in the journal Diabetes Care called the risk of pancreatitis from DDP-4 inhibitors “rare but real.” They pointed to “numerical imbalances” in previous clinical trials. They cited two new studies that showed a slight increase in the number of people who might develop pancreatitis after long-term alogliptin use.

Controversy still exists over whether DPP-4s can cause pancreatic cancer, and both the FDA and European Medicines Agency say not enough evidence exists to support this link.

In a study published in Diabetes in 2013, the researchers examined the pancreases of organ donors who were using DPP-4s and other incretin-based therapies. Researchers Alexandra Butler and colleagues found abnormal cells “with the potential for evolution into neuroendocrine tumors.”

In 2016, the FDA required Takeda to add a warning for heart failure to all of its alogliptin-containing medications. The agency said the danger should be of particular concern for “patients who already have heart or kidney disease.”

In its safety communication, the agency said it looked at two large clinical trials that found 3.9 percent of alogliptin-treated patients were hospitalized for heart failure compared to 3.3 percent of patients who took a placebo.

The drugs’ labels include warnings about the following reactions:

The labels instruct patients who have experienced angioedema with another DPP-4 inhibitor to use caution because it is unknown whether such patients may experience the same reaction with alogliptin. Patients who suspect a serious hypersensitivity reaction may need to stop taking the medication and consider alternative treatment for their diabetes, according to the label.

Nesina’s medication insert says Takeda has received postmarketing reports of elevated liver enzymes, which may be a sign of liver injury. However, the company says the information is insufficient to determine the cause of liver injury.

The National Institutes of Health (NIH) says the FDA has received reports of liver failure and injury in patients who took alogliptin. But it says these reports are rare, and “the characteristics and details of the injury have not been defined in the published literature.” With other DPP-4s such as sitagliptin and saxagliptin, enzyme elevations typically happened within two to 12 weeks of starting treatment, NIH said.

Symptoms that may indicate injury or damage to the liver include fatigue, anorexia, right upper abdominal discomfort or pain, dark urine, or yellowing of the skin and whites of the eyes.

In 2015, the FDA warned that drugs in the DPP-4 class may cause severe and disabling joint pain. The joint pain started in as little as one day to years after starting treatment. Typically, when the patient stopped the drug, the joint pain went away. But if they restarted treatment, the pain came back.

Out of all the drugs, alogliptin had the least number of reports of joint pain at the time of the safety communication. While Januvia had 28 reports, Nesina had only one.

Reports of Joint Pain
As of Sept. 20, 2018, FAERS had received six reports of arthralgia linked to Nesina.

Kazano combines alogliptin with metformin. This means Kazano can cause all of the side effects of Nesina as well as those of metformin. From 2013 to Sept. 30, 2018, FAERS received 66 adverse event reports involving Kazano. These included 12 serious cases and one death.

In clinical trials, researchers tested alogliptin and metformin in 2,095 patients. According to the drug’s website, the most common side effects in trials included:

Side Effects Specific to Metformin

Kazano carries a black-box warning for lactic acidosis, a potential side effect of metformin. Lactic acidosis is the buildup of lactic acid in the blood and requires immediate medical care. Without treatment, it can cause major organ failure.

Another potentially serious side effect of metformin is decreased B12 levels, according to Kazano’s medication label. Doctors should monitor their patients’ blood levels each year. B12 deficiency may lead to spinal cord disease and nerve and brain damage.

Did You Know
Metformin may result in ovulation and may lead to unintended pregnancies.
Common metformin side effects include:

From 2013 to Sept. 30, 2018, FAERS received 175 postmarketing reports of adverse events involving people who took Oseni. The most reported adverse events were weight gain, edema and swelling.

Clinical trials for alogliptin coadministered with pioglitazone included safety data from more than 1,500 people, according to the drug’s medication insert. Common side effects occurred in 4 percent or more of trial participants.

According to Takeda’s website, the most common Oseni side effects include:

Pioglitazone also increases the risk of edema and weight gain. In women, abnormal ovulation can occur, which can increase the possibility of pregnancy.

Germany, France and India removed Actos from the market after studies linked it to bladder cancer, but it remains on the market in the United States.

A two-year laboratory study of Oseni’s potential to cause cancer showed tumors in the urinary bladders of male rats, according to the drug’s medication insert. Additionally, during a three-year randomized clinical trial called PROactive, 14 out of 2,605 participants who had taken pioglitazone and 5 out of 2,633 participants who had taken a placebo, developed bladder cancer. This shows an almost three times greater risk of bladder cancer in patients who take drugs that contain pioglitazone compared with those who have not taken the drugs.

One study published in 2016 in The BMJ concluded pioglitazone was associated with an increased risk of bladder cancer compared with other antidiabetic drugs. Researchers determined the side effect was specific to the drug, not necessarily the class.

“The results of this large population-based study indicate that pioglitazone is associated with an increased risk of bladder cancer,” the study’s authors wrote.

“The results of this large population-based study indicate that pioglitazone is associated with an increased risk of bladder cancer.”

The clinical trial PROactive linked incidences of bone fracture to patients’ use of pioglitazone, according to the Oseni drug label.

Men treated with Oseni did not have a similar increase.