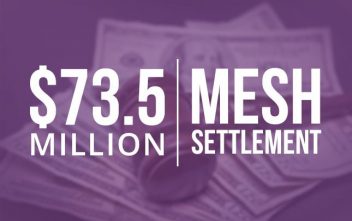 A jury slapped a Massachusetts-based medical device company with an order to pay $73.5 million after finding that it was liable for leaving a woman in severe pain following a vaginal mesh implant.

A 42-year-old former property manager, Salazar said she could no longer walk or sit normally and suffered severe pain after she was implanted with the mesh sling intended to treat mild incontinence. Instead of finding relief, she suffered several internal injuries that required treatment of 42 additional procedures and four major surgeries.

“This woman was seeking help with minor urine leakage and wound up with a catastrophic, life-altering injury that required four major surgeries. It’s a tragedy that these slings are still on the market.” Salazar’s lawyer Dave Matthews told Bloomberg.

Critics of vaginal mesh hope the large punitive damages award deters the company and others like it from producing more dangerous devices. Mesh is long-used in medical procedures, but some question whether it was designed to support pelvic tissue.

After a two-week trial, the Dallas jury found Boston Scientific acted with gross negligence, and this allowed the award for punitive damages.

“Over a seven-year period, Boston Scientific failed to warn doctors and their patients of the serious complications associated with the Obtryx sling, even though the company was aware of the product’s problems,” Matthews said in a statement.

Salazar’s legal team presented evidence that the company was aware of the sling’s questionable safety record. This included an internal e-mail from a company executive to sales reps telling them to keep results of a company study questioning device safety from physicians.

Matthews asked for an award of $14 million, and the jury awarded $23 million after it found that the mesh sling was faulty and the company failed to warn doctors and patients.

It also faces about 23,000 additional mesh lawsuits and previously talked about negotiating settlements. This is the first trial loss for the device maker after winning its first two.

Salazar’s award is the largest to date out of the handful of cases tried in courts. Over 60,000 cases against a number of companies still await resolution.

In an effort to resolve some claims, a number of mesh device makers decided to settle cases out of court.

Johnson & Johnson’s Ethicon unit has the largest number of federal lawsuits filed against it but refused to enter into settlement talks. The New Jersey-based drug giant lost a few cases already with awards in the millions. Just last week, a West Virginia jury ordered J&J to pay $3.27 million.