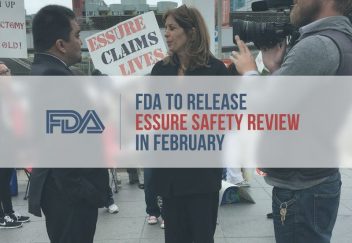 The U.S. Food and Drug Administration announced it will decide what action to take regarding Bayer’s permanent birth control device Essure in February 2016. According to the FDA, the review will be based on information gathered at its Obstetrics and Gynecology Devices Panel held this past September in addition to a number of studies and other data.

The FDA convened the September panel meeting after it found 5,000 adverse events were linked to Essure, including the death of women and fetuses. In addition, thousands of women reported a number of complications linked to the two metal coils implanted into the fallopian tubes. These range from painful sex to organ perforation. Women with severe allergic reactions to the metal even suffered autoimmune disorders.

The agency says Essure is a “high priority issue.”

“We wish to acknowledge the numerous stakeholders who testified at the September panel meeting and the many others who have expressed their viewpoints and shared their experiences with us,” the FDA said in its announcement. “Patient health and well-being is our first priority regarding this device and all medical devices.”

Several administrators and members of the Facebook group Essure Problems spoke at the FDA’s September panel meeting, urging the agency to pull the device from the market. The women say they were never warned about the risks. The group has 24,000 members and continues to grow.

Meanwhile, Bayer continues to stand by its product.

“Essure is supported by more than a decade of science and real world clinical experience,” a Bayer spokesperson told ABC 15. “Bayer has been in regular communication with the FDA about the risk-benefit profile of Essure and the informational needs of both healthcare providers and patients.”

Women Fight for the Right to Sue Bayer

Normally, when a drug or device harms a patient, the injured party may decide to file a lawsuit if they were not warned of side effects or dangers. In the case of Essure, thousands of women are barred from seeking compensation for devastating complications because it is a class III device.

These devices are protected from liability by their premarket approval (PMA) status because they have no equivalent and are supposed to be rigorously tested. But, women who suffer from Essure complications dispute this.

Angie Firmalino founded Essure Problems on Facebook after her Essure coils migrated and embedded in her uterus.

“I felt very betrayed and misled, not only by my doctor but by the manufacturer,” Firmalino said during the FDA panel meeting in September. “I honestly had no idea that these devices could expel from our fallopian tubes and perforate organs or embed in other areas of the body.”

Women are calling not only for others to be warned about the device’s dangers but also for the PMA to be revoked.

At the September meeting, Amanda Dykeman — an Essure Problems administrator — presented evidence that she said shows Bayer falsified clinical trial records to get the device approved.

“Bayer can stand here today and tell you they have years of data and follow-up with thousands of women supporting the safety and efficacy of Essure,” Dykeman said. “But the truth is none of it supports Essure as safe and effective because we have seen how patients’ concerns have been ignored during the clinical trials and passed off as not related to the device.”

Original participants of the Essure trials came forward and said their responses to questions about complications were falsified. According to information presented by Dykeman at the panel meeting, “alterations were made by the lead investigator of Essure, who also had equity positions with the company, providing serious financial conflict of interest.”

Women harmed by Essure accuse Bayer of putting profits before people and of abusing the PMA for profit. After the September panel, many look to the FDA to reclassify the device.

“At this point after the FDA panel hearing, I don’t believe that a device that did not go through the FDA’s “rigorous process” should be allowed to retain a class lll status and be protected under the PMA law,” Angela Lynch, an Essure administrator told Drugwatch. “Without PMA, Essure would not be able to maintain its status on the market.  More than 24,000 women harmed sounds a little different then 24,000 lawsuits. It’s a sad reality that lives affected are considered ‘less than’ a company’s bottom line.”

In the meantime, women are also taking their fight to D.C. with the help of Congressman Mike Fitzpatrick who introduced the E-Free Act to put pressure on the FDA.