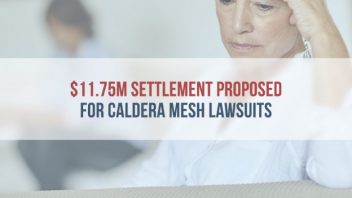 Lawyers representing women who say Caldera Medical’s transvaginal mesh implants caused them serious injuries proposed a blanket class action settlement to resolve thousands of lawsuits. The deadline to join the settlement is May 2, 2016.

More than 2,000 mesh lawsuits pending in California State Court in Los Angeles will be included in the proposed $11.75M settlement. According to plaintiffs, Caldera failed to warn the public about the risks of its mesh products, Lawsuits also assert that Caldera is guilty of fraud and deceit.

Transvaginal mesh is a net-like piece of porous plastic that surgeons use to treat incontinence and pelvic organ prolapse in women. Thousands of women claim these implants caused them permanent injuries such as organ damage, inability to have sex and nerve damage. Many women undergo multiple surgeries to try and remove the mesh.

The final approval hearing for the Caldera settlement is slated for June 13 in Los Angeles before U.S. District Judge Stephen V. Wilson. This settlement is separate from the thousands of cases in federal multidistrict litigation in West Virginia before Judge Joseph Goodwin.

Other Manufacturers in Settlement

In addition to Caldera, a handful of manufacturers include Biomedical Structures, Encision, Parker Hannifin, J-PAC LLC and Coloplast — a company that previously issued a settlement.

Caldera products included in the settlement include:

“If the Settlement is approved by the Court, those included in the Settlement Class will receive a cash payment from the Settlement Fund. You must file a Claim Form to get payment. Your legal rights are affected whether you act or don’t act,” Caldera said in its notice.

Plaintiffs who already filed lawsuits are automatically entered into the settlement and are entitled to submit a claim form for compensation from the fund. Those who have not yet filed a lawsuit may still join the settlement.

Caldera continues to deny the allegations set forth by plaintiffs.

A trial for 37 consolidated mesh lawsuits that are a part of the massive Ethicon MDL in West Virginia will be moved to a later date. Previously scheduled for April 11, 2016, the trial may continue sometime in August or September. There are still more than 70,000 lawsuits pending before Judge Joseph Goodwin in West Virginia against a number of manufacturers.

According to Judge Joseph Goodwin’s Pre-Trial Order #217, all discovery and proposed trial exclusions should be completed. Discovery involves all depositions and requests for information from both sides. After this stage, the trial can continue.

In February, Drugwatch reported on the planned Mesh Awareness Movement rally. The women of the group planned to protest in front of the court house on April 11 to support the 37 women. The rally will now be rescheduled.

“A lot of people who were going to the rally were disappointed and angry,” Janis Urban of MAM told Drugwatch. “Women are getting annoyed and upset at all these delays in the MDL.”

She said the rally planned for June 3 from 8am to 11am for Edwards v. Ethicon is still scheduled to go through in front of the Robert C. Byrd courthouse in Charleston, W. Va.

“We have a lot of women that write their congressmen and senators with no response. The only response I ever got was instructions on how to file a MAUDE adverse event report with the FDA,” she told Drugwatch.

For now, MAM is focusing its mesh awareness efforts to social media. The women are trying to hold manufacturers accountable.

“We have Twitter parties to raise awareness every Friday from 8pm to 11pm. This week, we are going after Johnson & Johnson,” she said.