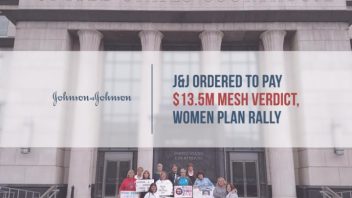 A Philadelphia jury ruled in favor of a woman in the second transvaginal mesh trial against Johnson & Johnson’s Ethicon subsidiary since December. Now, women advocating against mesh plan to rally to support other plaintiffs at the next J&J mesh trial in West Virginia.

The Philadelphia plaintiff, Sharon Carlino, said she suffered permanent injuries when the defendant’s transvaginal mesh product eroded inside her. Her lawsuit against J&J’s Ethicon stated the product was defective and caused complications such as permanent pain during sex.

The trial lasted about 2 weeks and the jury awarded Carlino with $3.5 million in compensatory damages and $10 million in punitive damages — damages intended to deter the company from repeating its negligent behavior. Carlino’s attorney, Shanin Specter, said in a statement the Carlino family was happy with the verdict.

“We hope Johnson & Johnson undertakes a bottom-up review of their conduct in vaginal mesh,” Specter told the Legal Intelligencer.

Tammy Jackson, co-founder of the Mesh Awareness Movement (MAM), is hopeful that the momentum in settlements will continue. MAM plans to stage West Virginia rally.

“I believe the last couple verdicts in the J&J cases are a small step forward to where the cases need to be,” she told Drugwatch.  “Women are losing jobs, homes and families. They have to be awarded enough, to live on and pay medical bills for the rest of their lives.  Women’s Lives matter. We are the glue that holes families together.”

Ethicon continues to stand by its product and plans to appeal the verdict, the company said in a statement.

“We have strong grounds for appeal,” said Samantha Lucas, an Ethicon spokeswoman, in the statement. “We believe the evidence showed Ethicon’s TVT midurethral sling was properly designed and labeled, Ethicon acted appropriately and responsibly in the research, development and marketing of the product, and TVT was not the cause of the plaintiff’s continuing medical problems.”

J&J and Ethicon previously took a big trial hit in December 2015 when a Philadelphia jury awarded $12.5 million to another woman who said mesh injured her.

Shortly after the December verdict, Bloomberg reported that J&J offered more than $120 million to settle between 3,000 to 4,000 mesh cases. The company still faces close to 30,000 federal lawsuits and thousands more are pending in state courts.

The next trial takes center stage in the U.S. District Court for the Southern District of West Virginia before Chief Judge Joseph R. Goodwin. Goodwin is in charge of about 80,000 lawsuits in seven different multidistrict litigations involving mesh.

On April 11, 2016, 37 women, whose cases were consolidated into one trial, will face J&J and Ethicon in court.

Tammy Jackson and other women who were injured by mesh plan to show their support for the women by rallying outside the Robert C. Byrd courthouse in West Virginia. Jackson, a Kentucky wife and mother, began her mesh “nightmare” nearly a decade ago when she had an Ethicon Gynecare product implanted to treat mild incontinence. She worked a busy shift as a nurse and noticed she would leak urine while working.

“Doctors told me I should just get this sling. It was an easy outpatient procedure and everything would be fine,” she told Drugwatch.

After the implant, she suffered severe pelvic pain, nerve damage and painful sex, but she never knew it was the mesh. She had to have several surgeries to try and relieve the pain and had to stop working at a job she loved.

“I have to get up three hours before taking my nine-year-old daughter to school because I have to prepare myself for the effort,” said the once active mom.

Jackson and fellow mesh sufferer, Lisa Mason, started MAM as a way to fight back and bring awareness. A passionate advocate, Jackson isn’t shy about speaking out.

She hopes the April rally will bring more awareness. This year, Jackson hopes to bring her daughter because “mesh affects entire families.” She invites all supporters to come join her in West Virginia.

“Last year, three more women died from mesh complications,” she said. “But, until it hits Washington, no one will pay attention. They want us to remain as invisible as the mesh that is in us, but we’re not going to do that.”