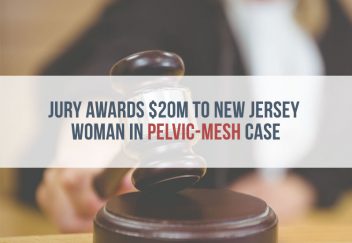 A Philadelphia jury has awarded a $20 million verdict in favor of a New Jersey woman who suffered complications after a June 2007 pelvic-mesh procedure.

The award — $17.5 million of which was for punitive damages — is the latest against Ethicon, a subsidiary of Johnson & Johnson, which has faced thousands of lawsuits in connection with its vaginal-mesh products.

In February 2015, the company settled more than 100 lawsuits filed by women who claimed the Mentor ObTape Transobturator Sling devices caused them permanent injuries.

The company has maintained that the benefits of the devices outweigh the risks.

According to documents filed in Common Pleas Court in the case that resulted in the $20 million verdict, Peggy Engleman, 56, a resident of Cinnaminson, N.J.,  had an Ethicon “TVT-Secur”  device implanted at Frankford Hospital in Philadelphia to treat stress urinary incontinence.

After the procedure, she complained of severe pain and complications, and had parts of the device surgically removed later in 2007 and more parts taken out in 2008 and 2013.

The doctor who performed the 2013 procedure testified during a deposition that he could not be confident that all the mesh had been removed.

Engleman became aware that the TVT-Secur device was defective after seeing a television commercial in 2013, and she filed her lawsuit in April 2014.

“Ms. Engleman continues to suffer grave physical and psychological injuries as a result of the defective TVT-Secur,” her attorney, Martin Schrama, asserted in a court pleading.

The plaintiff argued that Ethicon knew of the risks of the specific injuries Engleman suffered, but “purposefully determined to conceal those risks, rather than warn Ms. Engleman or her doctors.”

The plaintiff maintained that Engleman’s surgeon, Dr. Gregory Bolton, was not made aware of potential problems with the device until after he performed Engleman’s procedure, while Ethicon contended that the physician was well aware of the risk of complications at the time of the surgery.

Ethicon also argued unsuccessfully in court filings that it should not have to pay punitive damages because Food and Drug Administration medical panels found in 1982 that the specific mesh involved in this case had an “established history of safe and effective use” and met “a generally accepted satisfactory level of tissue compatibility.”

And in 1988, the FDA found that “the biocompatibility of the materials now being used in these devices has been established through their successful use for a number of years” and “performance standards will provide reasonable assurance of the safety and effectiveness of these devices.”

The plaintiff responded in court pleadings that another court already found that argument “meritless” because is misrepresents the FDA clearance process at issue.

In June 2012, Ethicon stopped selling four of its mesh products after more than 600 women filed lawsuits against the manufacturer. Among the products discontinued then was the TVT-Secure.

In a statement to Philly.com after the verdict, Ethicon said, “We believe the evidence showed Ethicon’s TVT-Secur device was properly designed, Ethicon acted appropriately and responsibly in the research, development and marketing of the product, and TVT-Secur was not the cause of the plaintiff’s continuing medical problems.  Therefore, we are disappointed with today’s verdict and feel we have strong grounds for appeal.”

Transvaginal mesh has been linked to a high rate of complications. The FDA classifies the device as “high risk.” The agency has stated that the device is not more effective than other treatments for prolapse or incontinence. Despite requests from numerous public safety organizations and evidence of complications in thousands of women, the FDA has not issued a recall of the devices.