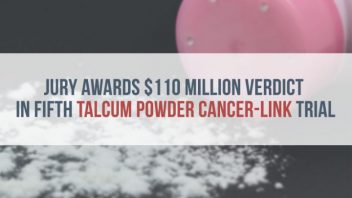 The verdict came at the end of the fifth trial over claims that Johnson & Johnson talc products caused ovarian cancer. The first three trials in 2016 resulted in verdicts of $72 million, $55 million, and $70 million for plaintiffs who sued the drug and cosmetics giant. Johnson & Johnson prevailed in a fourth trial in March.

Lois Slemp claimed she used Johnson & Johnson’s baby powder and Shower to Shower for more than 40 years. The 62-year-old woman was diagnosed with ovarian cancer in 2012. It has since spread to her liver.

An attorney for Slemp said the jury awarded $5.4 million in actual damages and another $105 million in punitive damages.

In a statement, Johnson & Johnson said it deeply sympathizes with the women and families bringing lawsuits, but plans to appeal the latest decision even as it prepares for more trials. The company also questioned the science behind the plaintiff’s allegations.

The International Agency for Research on Cancer (IARC), part of the World Health Organization, says using talcum-based powder on women’s genitals is “possibly carcinogenic to humans.” The American Cancer Society says that in its natural form, some talc contains asbestos, a mineral known to cause cancers, but cosmetic talc products in the U.S. have been asbestos-free since the 1970s.

However, a 2014 study published in the International Journal of Occupational and Environmental Health called into question the accuracy of current methods the industry uses to determine if talc is free of asbestos. The methods are based on equipment and processes available in 1984.

By using newer technology and approaches, the researchers were able to find asbestos fibers in talc that otherwise escaped detection.

Multiple studies since the 1960s have pointed to a link between genital use of talc-based powders and ovarian cancer. Dr. Daniel Cramer has studied the potential connection since the 1980s.

“Talc is a good drying agent,” he told Reuters Health in 2016, “but women should know that if it’s used repeatedly, it can get into the vagina and into their upper genital tract.”

The lawsuits against Johnson & Johnson claim the company ignored studies linking ovarian cancer to talc and failed to warn their customers.

The five trials over Johnson & Johnson talc are part of nearly two dozen cases that have been consolidated in Missouri state courts. More than 1,000 other cases are pending in the state.

Another 233 lawsuits have been combined into a federal multidistrict litigation (MDL) in New Jersey. MDLs combine similar cases to move them through the legal system more quickly.

About 350 more lawsuits are pending in state courts in California, New Jersey, and Delaware.

Corporate filings from Johnson & Johnson report more than 3,000 lawsuits have been filed over the talc-cancer connection against the company.

Johnson & Johnson has now lost verdicts totaling $197 million in talc lawsuits. The latest award comes on the heels of an expensive year of court battles for the company. Bloomberg reported six of the seven largest verdicts of 2016 were against Johnson & Johnson. In addition to the three talc verdicts last year, the company lost two hip implant lawsuits totaling more than $1.5 billion and a lawsuit over its drug, Risperdal, worth $72 million for plaintiffs.