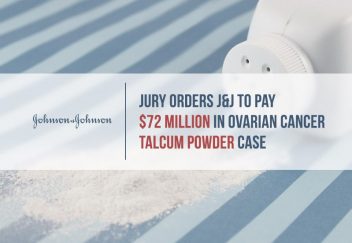 A Missouri jury awarded the family of a woman a multi-million dollar verdict against Johnson & Johnson after she sued the Big Pharma giant claiming the company’s talcum powder caused her ovarian cancer.

The St. Louis jury found J&J knew about the link between talc-based products and cancer for decades and failed to warn the public. They found the company liable for fraud, negligence and conspiracy. The jury ordered J&J to pay $10 million in compensatory damages and $62 million in punitive damages. This is the first verdict to award damages in a talcum powder case.

For decades, women used talcum powder for feminine hygiene, sprinkling it on undergarments and the vaginal area to prevent odor or extra moisture. A 2013 study published in Cancer Prevention Research showed women who used talcum powder in the groin area had up to 30 percent greater risk in developing ovarian cancer.

Plaintiff Jackie Fox died of ovarian cancer after using Johnson’s baby powder and Shower to Shower for feminine hygiene for more than 35 years. She died last year at age 62.

Fox’s attorney, Jere Beasley, said J&J “knew as far back as the 1980s of the risk,” but still lied to the public and regulatory agencies, Reuters reported.

J&J has not stated whether it will appeal the verdict, but it stands by its product.

“We have no higher responsibility than the health and safety of consumers, and we are disappointed with the outcome of the trial,” Carol Goodrich, a Johnson & Johnson spokeswoman, said in a statement. “We sympathize with the plaintiff’s family but firmly believe the safety of cosmetic talc is supported by decades of scientific evidence.”

The company still faces about 1,200 more lawsuits from women and their families saying J&J was aware of the risk, but did nothing to warn consumers.

Juror: It Was Clear J&J was ‘Hiding Something’

According to jury foreman Krista Smith, internal company documents presented at trial allowed the jurors to reach a verdict after only four hours.

“It was really clear they were hiding something. All they had to do was put a warning label on,” Smith told Bloomberg.

In this case, Fox’s lawyers revealed a 1997 letter from a former J&J consultant “warning that the company’s responses to the findings of nine scientific studies could end up comparing the talc industry to the cigarette industry,” the National Law Journal reported.

Scientists suspected for decades that talcum powder could be linked to ovarian cancer. In the 1970s, researchers theorized that particles of talc could enter a woman’s body through the vagina and make their way to the ovaries. Since then, more studies found links between talcum powder and cancer. Though, the findings are still steeped in controversy.

Still, baby powder is a multi-million dollar product, and the revenue generated is estimated at about $19 million. About 19 percent of baby powder users in the U.S. use J&J’s brand. The company still sells talc-based products even after the American Cancer Society encouraged women to switch to cornstarch for use in the genital area in 1999.

Fox’s award is the largest verdict to date in this type of case, but this is not the first time J&J found itself in court over its talc products.

Deane Berg used Johnson’s Baby Powder and Shower to Shower powder as a feminine hygiene product from 1975 to 2007. Like Fox, she filed a lawsuit after she was diagnosed with ovarian cancer and three doctors found talc particles embedded in cancerous tissues. The jury found J&J failed to warn, but did not award compensatory damages.