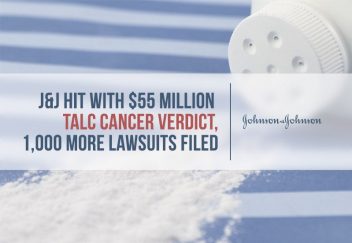 A St. Louis jury slapped Johnson & Johnson with a multi-million dollar verdict after a woman claimed the pharma giant’s talcum powder gave her ovarian cancer. This is the company’s second trial loss this year.

Plaintiff Gloria Ristesund used J&J’s talc-based products for feminine hygiene for about 40 years and a doctor diagnosed her with ovarian cancer in 2011. She was forced to undergo a hysterectomy. Jurors awarded Ristesund with $5 million in compensatory damages and $50 million in punitive damages after finding J&J liable for her injuries and guilty of hiding the risks.

This verdict comes shortly after J&J was dealt a massive $72 million loss in the first talc trial in February. Now, the company faces more than 1,000 state and federal lawsuits saying it ignored evidence linking its Johnson’s Baby Powder and Shower-to-Shower talc-based powders to ovarian cancer.

“Science has been simple and consistent over the last 40 years: There’s an increased risk of ovarian cancer from genital use of talc,” plaintiff’s attorney Allen Smith told jurors.

At the end of the three-week trial, jurors deliberated for about a day before returning the verdict. They struggled at first to agree whether talc contributed to Ristesund’s ovarian cancer, but in the end sided with the plaintiff.

“After we agreed on that, everything was easy,” jury forewoman Teri Brickey told Bloomberg. “We felt like they knew for decades that they should have put a warning on this product.”

“The more talc verdicts that come down against them adds to the public’s growing distrust of their baby powder, which is one of their iconic products,” Carl Tobias, a law professor at the University of Richmond in Virginia told Bloomberg. “There are both economic and reputational issues that may motivate them to start thinking about a global settlement of these cases.”

The world’s largest producer of health care products disagrees. Its spokeswoman, Carol Goodrich, told Bloomberg in an emailed statement that the company denies any link between ovarian cancer and talc. It also does not feel women need to be warned.

“Unfortunately, the jury’s decision goes against 30 years of studies by medical experts around the word that continue to support the safety of cosmetic talc,” Goodrich said. “Johnson & Johnson has always taken questions about the safety of our products extremely seriously.”

At the trial, documents surfaced suggesting that J&J targeted women to boost talcum powder sales. Smith also showed jurors documents that he said showed the company knew about the health concerns since the mid-1970s.

He also said doctors found talc in Ristesund’s ovarian tissue after her hysterectomy.

“Nobody knows what causes ovarian cancer,” she argued.

J&J may need to prepare for an onslaught of lawsuits. Following these most recent verdicts, thousands more women and families are coming forward with talcum powder claims. One attorney, Jere Beasley, told Bloomberg he was reviewing about 5,000 claims. Ristesund’s case was one J&J picked for trial, he said.