Drug and Device Companies Gave Billions to Doctors in 2016 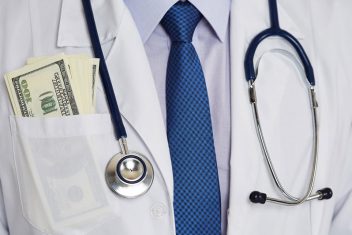 Pharmaceutical and medical device companies gave $8.18 billion to doctors and teaching hospitals in the U.S. in 2016, an increase of $90M or 1.1 percent over the previous year, according to new numbers from the Centers for Medicare and Medicaid Services.

The number represents a 4 percent increase from 2014, when companies paid $7.86 billion, the data shows. The payments are for things like travel, research, gifts, speaking fees, meals, and ownership or investment interest.

The latest data release comes on the heels of a study earlier this year that found that about 65 percent of patients in the United States visited a doctor who received payments from drug companies, although most have no idea about the payments.

“These findings tell us that if you thought that your doctor was not receiving any money from industry, you’re most likely mistaken,” said study author Genevieve Pham-Kantor, an assistant professor at Drexel’s Dornsife School of Public Health in Philadelphia, Pennsylvania. “Patients should be aware of the incentives that their physicians face that may lead them to not always act in their patients’ best interest. And the more informed patients are about their providers and options for care, the better decisions they can make.”

“If the Sunshine Act, as part of the Affordable Care Act, is repealed, it will certainly move us backwards,” Pham-Kanter said.

“Drug companies have long known that even small gifts to physicians can be influential, and research validates the notion that they tend to induce feelings of reciprocity,” said study co-author Michelle Mello of Stanford.

“Whether a formal dinner or a brief lunch in a doctor’s office, these encounters are an opportunity for drug company representatives to discuss products with physicians and their staff,” said Adams Dudley, professor of medicine and director of the Center for Healthcare Value at the Philip R. Lee Institute for Health Policy Studies in San Francisco, California, and the senior scientist on the study. “The meals may influence physicians’ prescribing decisions.”

Most Payments Covered Food and Drinks

Other studies have sought to quantify potential conflicts of interest arising from financial ties between doctors and pharmaceutical and medical device companies.

One study published in the Annals of Emergency Medicine found that that the percentage of physicians active within particular specialties who received payments ranged from 14.6 percent in preventative medicine to 90 percent in orthopedic surgery. Most payments, 83 percent, were for less than $100, while 86 percent were in the form of food and beverages.

According to the new government data, below are some examples of companies and the amounts they paid out in 2016 in general and research payments: