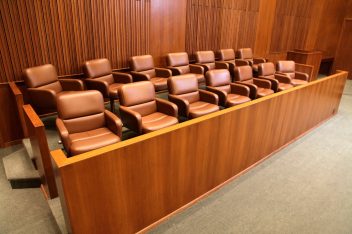 A New Jersey jury ordered C. R. Bard to pay $35 million in punitive damages to a couple for the company’s actions in marketing two transvaginal mesh devices that left the woman in permanent pain.

The punitive award is on top of $33 million jurors previously ordered to compensate the couple — $23 million for Mary McGinnis and $10 million for her husband.

Mary McGinnis, 70, testified standing up in the trial for her lawsuit against the company, which is facing thousands of similar lawsuits around the country. McGinnis said standing was less uncomfortable and made her more able to manage her pain. She described the pain as “hot pokers all the time.”

McGinnis had the company’s mesh models named Avaulta Solo and Align TO implanted March 12, 2009, during surgery to treat her bladder’s movement, called prolapse. Within months, she started to experience erosion, which happens when mesh wears through internal tissue.

“The pain is beyond debilitating,” McGinnis testified. “It hurts so much I can’t cry…My body is always in fight or flight mode.”

Since her original surgery, McGinnis has undergone at least three more mesh removal and reconstructive operations, the most recent in February 2017.

McGinnis testified she is no longer able to be intimate with her husband, she sleeps every night with cold packs and uses a number of different therapies and methods to control her physical problems.

Her lawyer, Adam Slater, said Bard officials knew the properties of the plastic used to make the devices were dangerous to women. The supplier warned about its use in implantation. “They knew it was causing harm,” he told jurors in his summations. “They kept selling it.”

McGinnis was unaware that the product wasn’t tested, Slater said. “Mary didn’t know that she was part of an experiment.”

They could have done more research, Slater said. “They didn’t do a clinical study. And we know why…The Bard culture said, go to market.”

Drugwatch viewed the summations and recordings of other parts of the trial via Courtroom View Network.

Lori Cohen, attorney for Murray Hill, N.J-based Bard, argued during that the devices McGinnis had implanted are safe and effective. Cohen said the company followed accepted standards of care. She told jurors that her problems may have arisen because of faulty technique on the part of her surgeon.

Moreover, she suggested many of the issues may be the result of medical issues the woman had before the initial implant. McGinnis, Cohen argued, had a “significant pre-implant medical history.”

After the compensatory award was announced, Cohen told jurors that the company “has received the message and hears you…We respect you. We respect your verdict.”

She said there was “no reason” for punitive damages.