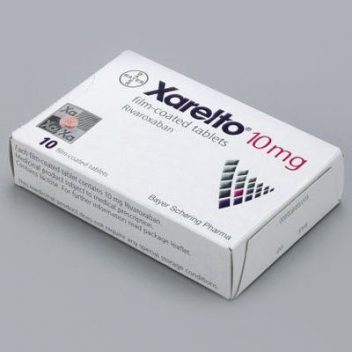 Seven years after the anti-clotting drug Xarelto entered the market, the U.S. Food and Drug Administration has approved an antidote to the drug’s most dangerous side effect – uncontrolled bleeding.

The antidote has the potential to prevent thousands of deaths a month in the U.S. At the same time, it carries its own risk of serious side effects.

After initially rejecting the drug, the FDA will allow Portola Pharmaceuticals Inc. to market Andexxa for patients taking Xarelto and Eliquis who experience serious, uncontrolled bleeding.

Until now, there have been no antidotes to reverse this condition that led to about 117,000 hospital admissions in the U.S. in 2016.

Xarelto and Eliquis work to limit clotting by inhibiting an enzyme called Factor Xa. This enzyme helps the blood to clot. Xarelto and Eliquis are prescribed to reduce the risk of stroke. But they can cause serious and fatal bleeding.

According to Portola, there have been nearly 2,000 deaths a month related to bleeding from Factor Xa inhibitor drugs.

News of FDA’s approval of Andexxa sent Portola’s stocks up more than 25 percent on Friday, May 4. The South San Francisco-based biopharmaceutical firm, founded in 2003, has 170 employees and is traded on Nasdaq (PTLA).

The antidote’s prospects had been questionable after regulators denied approval in 2016 and then delayed a decision on the drugmaker’s resubmission.

The approval comes with a requirement that the company conduct post-market studies involving at least 440 patients to evaluate the development of several events including:

The drug will carry a boxed warning on its label that the drug is associated with these events and that patients should be monitored for them.

The most common adverse reactions are urinary tract infections and pneumonia, occurring in 5 percent or more of patients.

“We are grateful to the patients who participated in our trials, our clinical trial collaborators, our employees and the FDA for their help in bringing this new drug to market for the benefit of patients with Factor Xa inhibitor-related bleeding,” Bill Lis, chief executive officer of Portola, said in a statement.

Portola says it plans to launch Andexxa by early June under an early supply program. A broader commercial launch is expected in early next year.

Andexxa is Portola’s second FDA-approved medicine. The first was Bevyxxa, which it describes as “the first and only oral, once daily Factor Xa inhibitor.”

This drug is an alternative to Lovenox for use in adults hospitalized for an acute condition. Andexxa is not approved as an antidote for Bevyxxa.

The company has also developed another drug, cerdulatinib, for the treatment of hematologic cancers.

Andexxa was given the go-ahead under the FDA’s Accelerated Approval pathway after regulators designated it an Orphan Drug and Breakthrough Therapy.