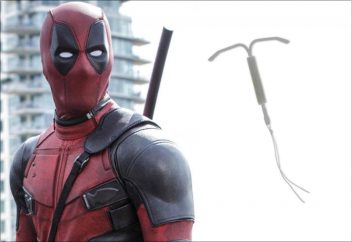 It may be the most unexpected cameo ever in a Marvel movie. An IUD has a brief but important role in Deadpool 2.

In the film, Deadpool’s girlfriend Vanessa surprises him on their anniversary. She gives him her IUD in a gift box (this is a romantic gesture in the Deadpool universe).

IUDs are intrauterine devices. Doctors place them in the uterus. IUDs work by preventing sperm from reaching an egg.

The birth control device has moved in and out of pop culture for half a century. The IUD has been both a symbol of the women’s movement and a synonym of medical disaster.

It became the most used form of reversible birth control in the world. But American women moved away from IUDs after problems with some devices in the 1980s. The Deadpool 2 appearance is a nod to the birth control device’s return in America in the past few years.

Things You May Not Know About IUDs

IUDs seem a perfect fit for the Deadpool universe. The devices’ history features as many plot twists and unbelievable scenes as the film.

Here are some highlights from the devices’ history:

German gynecologist Dr. Ernst Grafenberg introduced the “Grafenberg Ring.” It was the first modern IUD. But Grafenberg was better known for his earlier research. He was the first to identify the G-spot – which is also named after him.

Planned Parenthood founder Margaret Sanger launched her “Refugee Department.” She leveraged her home and lined up wealthy donors. The private effort helped get prominent doctors and scientists out of Germany. Sanger’s efforts, and a reported ransom, freed Grafenberg from prison and brought him to New York. His work continued after the war.

Chapstick maker A.H. Robins Company bought the rights to the Dalkon Shield. The FDA did not approve medical devices at the time. By 1975, more than 2.8 million women used the Dalkon Shield. But the CDC blamed more than 15 deaths on the device. More than 300,000 women filed lawsuits against A.H. Robins. The company declared bankruptcy 10 years later. It sold Chapstick and its remaining assets to what is now Wyeth. The Dalkon Shield disaster led to new regulations. Congress gave the FDA authority to oversee medical devices.

IUD use in the U.S. began a decades-long decline in the Dalkon Shield aftermath.

Bayer introduced Mirena in the U.S. The IUD has a hormone coating Bayer claimed further protects against pregnancy. Women later blamed Mirena for serious side effects. These included infection and intracranial hypertension.

The Affordable Care Act (ACA), better known as Obamacare, took effect. It reduced out-of-pocket costs for IUDs. A study found IUD use climbed more than 10 percent in five years under the law. But only about one in seven American women on birth control used IUDs.

Women and their families are suing Bayer over allegations Mirena caused injuries. More than 500 Mirena lawsuits are pending in federal court.