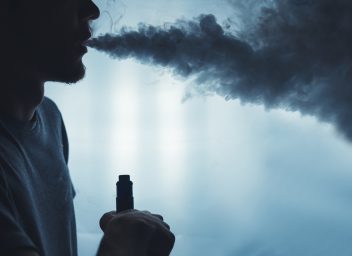 At least 450 people from 33 states have developed a vaping-related lung illness and at least six people have died from the condition. Health researchers are scrambling to track down the cause while urging people to give up vaping until they’ve found it.

The condition has affected primarily young e-cigarette users within 90 days of vaping. It is described as a severe form of pneumonia caused by lipids, or fats, in the lungs. But researchers are not sure whether the lipids are a significant clue to the condition’s cause. Treatment often requires putting patients on mechanical ventilators to keep them breathing.

While regulators and researchers look for the cause behind the outbreak, the White House announced on Sept. 11 that it intended to ban nontobacco flavored e-cig products. It is still unclear what role, if any, flavor additives play in causing the lung illness, but flavored e-liquids are often cited as a leading reason young people take up vaping.

“The Trump Administration is making it clear that we intend to clear the market of flavored e-cigarettes to reverse the deeply concerning epidemic of youth e-cigarette use that is impacting children, families, schools and communities,” Health and Human Services Secretary Alex Azar said in a statement.

The Centers for Disease Control and Prevention has not yet determined exactly what it is about vaping that’s causing the mystery illness. At the same time, the condition has exposed how little regulators and the medical community may actually know about potential e-cigarette side effects.

“While the investigation is ongoing, CDC has advised that individuals consider not using e-cigarettes because as of now, this is the primary means of preventing this type of severe lung disease,” Dr. Dana Meaney-Delman, the CDC incident manager for the outbreak, said during a Sept. 6 briefing by state and federal public health leaders.

Dr. Joshua Mansour, a Los Angeles-based board-certified hematologist and oncologist, recommends people who vape talk to addiction counselors or to their doctors about nicotine gum, patches or other approved cessation methods to wean them off their vaping addictions.

“While the investigation is ongoing, CDC has advised that individuals consider not using e-cigarettes because as of now, this is the primary means of preventing this type of severe lung disease.”

The CDC recommends that anyone who continues using e-cigarettes or other vaping products should monitor themselves for symptoms of the condition. These include coughing, shortness of breath, chest or abdominal pain, nausea, vomiting and fever. If e-cig users experience these symptoms, they should seek medical attention right away.

Both the CDC and the Food and Drug Administration ask anyone who experiences any vaping-related health problems to report what happened to the FDA’s Safety Reporting Portal.

Wisconsin public health officials first raised the alarm about the mystery illness on July 10, when the Children’s Hospital of Wisconsin reported five cases of the condition. Illinois later identified potential cases dating back to as early as mid-April.

“What we have found so far is that the majority of people who have become ill are generally healthy, are young — a median age of 19 years — and the majority have been men,” Dr. Jennifer Layden of the Illinois Department of Public Health said during the Sept. 6 briefing.

Public health officials report most patients had symptoms for days or weeks before going to the hospital. In Illinois, more than half of patients required intensive care treatment.

The illness is the second complication of vaping to gain widespread attention in 2019. In April, the FDA identified 35 reports of mostly young people experiencing seizures after vaping. By August, the agency had uncovered a total of 127 vaping-related seizure reports going back to 2010.

A Florida couple filed a lawsuit against e-cigarette manufacturers JUUL Labs, Altria Group Inc. and Philip Morris USA Inc. in 2019 after their 15-year-old daughter suffered seizures they blamed on nicotine ingestion from vaping.

Injured by complications from E-cigarette use? Get a Free Case Review

Researchers Find Lots of Leads, No Clear Cause

The CDC launched its investigation into the lung conditions on Aug. 1. It and the FDA have been working with state health departments and other public health officials to pinpoint a cause. Researchers have been looking for clues in more than 100 samples of vaping products retrieved from patients.

“Based on the clinical and laboratory evidence to date, we believe that a chemical exposure is likely associated with these illnesses,” Meaney-Delman said. But she was quick to note that more information is needed to confirm researchers’ suspicions.

Neither the FDA nor the CDC knows exactly what chemical could be the culprit, and the list of suspects could be a long one.

“The samples we’re continuing to evaluate show a mix of results and no one substance or compound, including vitamin E acetate, has been identified in all of the samples tested,” Mitch Zeller, director of the FDA’s Center for Tobacco Products, said during the Sept. 6 briefing.

Vitamin E acetate had been mentioned in some media reports as a possible cause. It is sometimes used to thicken vaping fluids that contain THC, the chemical the causes most of marijuana’s mind-altering effects. Vitamin E acetate can be dangerous if it’s heated and inhaled.

Some patients reported vaping THC. But others say they used only nicotine vaping fluids. And some reported using both kinds of products.

The FDA is testing samples of vaping fluids for THC, nicotine, additives, pesticides, opioids and toxins that could be causing the problem. Public health officials say the problem could even be caused by some combination of ingredients.

Wisconsin authorities on Sept. 5 arrested a 20-year-old man accused of running a counterfeit THC vaping cartridge operation. Police say the operation was selling 3,000 to 5,000 cartridges every day at $16 each, according to The Associated Press. It’s unclear whether the products were related to the lung illness, but the incident underlined authorities’ warning about not using suspicious vape products.

“If you’re thinking of purchasing one of these [vaping] products off the street, out of the back of a car, out of a trunk, in an alley, or if you’re going to then go home and make modifications to the product yourself using something that you purchased from some third party or got from a friend, think twice,” Zeller said.

E-cigarettes faced relatively few regulations for nearly 10 years after they hit the market in the United States. The FDA required vaping products receive FDA approval before being sold starting in 2016. But at the same time, the agency gave vaping product makers until 2022 to come up with plans to prevent underage access to their products.

Since then, the FDA has issued more than 8,000 warning letters to retailers about sales to minors. The U.S. Surgeon General has described vaping by adolescents and young adults as an “epidemic.”

Mansour, who works in the field of hematopoietic stem cell transplantation and cellular immunotherapy, suggests regulators may have dropped the ball by not tackling the rise of vaping sooner.

“I think we did a good job marketing the fact that traditional cigarettes are bad for you, but that direct link between e-cigarettes and their dangers hasn’t been clear until these recent episodes of lung illnesses,” Mansour told Drugwatch.

No one vaping product or device has been implicated as the cause of the illnesses. But vaping’s increased prevalence has been driven by the popularity of JUUL e-cigarettes. The devices hit the market in 2015 and now account for about 75 percent of e-cig sales.

“I think we did a good job marketing the fact that traditional cigarettes are bad for you, but that direct link between e-cigarettes and their dangers hasn't been clear until these recent episodes of lung illnesses.”

The FDA sent a warning letter to JUUL Labs on Sept. 9 for illegally marketing its products as safer than tobacco. The agency said there was no scientific evidence for the claim, and the agency has never approved any vaping product as a smoking cessation device.

“JUUL has ignored the law, and very concerningly , has made some of these statements in school to our nation’s youth,” Acting FDA Commissioner Dr. Ned Sharpless said in a news release.

Mansour believes regulators and the medical community should take the lung illness outbreak as a warning not to repeat the mistakes that had been made with tobacco.

“It took decades before doctors even believed that there was a case against tobacco cigarettes. And now, they’re known to be the deadliest artifact of what we have done to ourselves in the history of human civilization,” he said. “Our experience from that alone should serve as a big, red flag for what vaping could be and what we still don’t know about it. I don’t think any of us want to see how far this can go.”