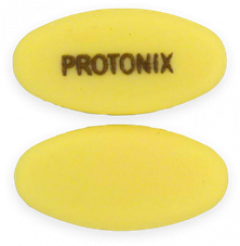 Protonix (pantoprazole sodium) is a drug in a class of powerful acid-suppressing medications called proton pump inhibitors (PPIs). These medicines can cause rare but life-threatening side effects. Protonix is one of several PPIs named in lawsuits over serious kidney conditions.

Protonix (pantoprazole sodium) is a proton pump inhibitor (PPI). PPIs are powerful medications that block the production of acid in the stomach. They treat acid-reflux and related conditions. Other PPIs include, among others, Nexium (esomeprazole) and Prilosec (omeprazole).

Protonix is a prescription-only medication. Doctors may prescribe it to adults or to children 5 years and older.

Doctors may also prescribe Protonix for long-term use to treat excess stomach acid. Long-term treatment is anything lasting more than eight weeks. There is no research on the effects of taking Protonix for more than 12 months.

Protonix side effects include rare but serious conditions. Serious PPI side effects most often result from long-term use.

Studies have found links between PPIs and more than a dozen major side effects. Lawsuits also blame Protonix and other PPIs for life-altering problems.

Symptoms of Serious Protonix Side Effects

People should let their doctor know immediately if they experience Protonix side effects. These symptoms may indicate a serious problem.

When to Call Your Doctor About Protonix Side Effects

Always talk to your doctor before stopping Protonix. Stopping suddenly can cause other medical problems.

Some people may be able to manage their symptoms with alternatives to PPIs. These may include other medications or lifestyle changes.

Less serious Protonix side effects are more likely to occur than serious ones. The most common side effects of Protonix are the same for adults and children, but upper respiratory infection is only common in children who take Protonix.

Less Serious Side Effects of Protonix

The U.S. Food and Drug Administration has ordered PPI makers to add specific warnings to their products. But the list does not include all potential Protonix side effects.

Protonix Side Effect Label Warnings
Lawsuit Information
Multiple PPIs, including Protonix, have been named in lawsuits from people who say they suffered serious kidney problems after taking them. Learn more about currently pending litigation.
View Lawsuits

Studies dating back to the 1990s have linked PPIs like Protonix to kidney problems. Protonix kidney side effects may include kidney damage or injury.

The New Jersey MDL includes lawsuits over several different PPI brands. As of July 2019, there were 12,775 PPI lawsuits in the MDL.

There have been no verdicts or settlements in the MDL. But Pfizer once paid a $55 million settlement to the U.S. Justice Department in a Protonix lawsuit. The government had claimed Pfizer promoted Protonix for unapproved uses.

The recommended adult Protonix dose is 40 mg once daily. Protonix is also available in 20 mg doses for children five to 16 years of age.

Doctors may also deliver Protonix as an IV drip or injection into a vein. Hospitals may prescribe Protonix to prevent stress ulcers during patients’ stay. Studies have suggested Protonix and other PPIs may be over-used in hospitals.

Protonix interactions can happen if people take other drugs while using Protonix. People should tell their doctors about medicines they are on before taking Protonix.

Protonix Drug Interactions Can Occur With:

Protonix can also cause false positives in drug tests for marijuana use.

People can suffer a Protonix overdose. In the U.S., people should call the Poison Help Line for Protonix overdose help. That number is 1-800-222-1212. It connects people to their local poison center.

There is no Protonix over-the-counter (OTC) version available. Other OTC drugs may be similar to Protonix. Prilosec OTC, Nexium 24HR and Prevacid 24HR are available over the counter.

The generic name for Protonix is pantoprazole. Pfizer’s patent on pantoprazole ran out in 2010. The FDA approved the first generic versions of pantoprazole that same year.

The agency has approved several generic pantoprazole applications since then. All generic versions require a prescription.

Share This Page:
Related Pages
Brands
Tell Us What You Think