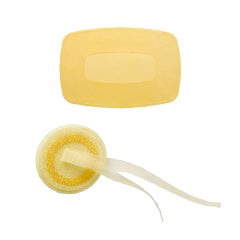 Maquet Getinge Group purchased the company in 2011 for $680 million. Atrium continues manufacturing C-QUR at its plant in New Hampshire.

What Is C-QUR Surgical Mesh?

Atrium intended C-QUR for inguinal hernia repair using the IPOM surgical technique. This technique places mesh between the hernia wound and the intestine. It can create an adhesion risk. Adhesions are scar-like tissue that connect tissue that wouldn’t normally be connected.

C-QUR mesh has a fish-oil-derived coating. Atrium claims the fish oil prevents inflammation and adhesions. But studies show it has higher adhesion and infection rates than many other brands.

What Is C-qur Made Of?
C-QUR mesh is made of polyethylene plastic and coated with Omega-3 fatty acid fish oil.

It allows a new device on the market if its maker shows that it is “substantially similar” to one already approved. Since 2006, Atrium produced several other C-QUR variations.

Adhesions and Other Complications

Atrium claimed that the fish-oil-based coating would reduce adhesions and reactions. But people still reported these and other complications to the FDA. Some studies have shown higher infection rates linked to C-QUR compared to other mesh.

Reports of C-QUR Complications Include:

C-QUR’s fish-oil-based coating is a bioabsorbable film. Atrium claimed it would keep mesh from touching internal organs. This would prevent mesh adhesions. Atrium claimed the coating “has been shown to minimize tissue attachment to mesh.”

In one of its 2011 product brochures, Atrium said the coated mesh provides patients with “a durable, long lasting repair, and a more natural healing experience.”

Atrium’s studies found its coated mesh had a “minimal inflammatory response” compared to non-coated meshes. It also performed as well as or better than several commercially available hernia mesh products such as Ethicon’s Proceed and C.R. Bard’s Composix for tissue attachment and mesh contraction. Mesh contraction can cause pain and other issues. C-QUR mesh had lower rates of mesh contraction, according to the product brochure.

But some studies question the safety and effectiveness of Atrium C-QUR hernia mesh.

One team of researchers tested C-QUR on animals. Researchers found that the infection rate was higher with C-QUR mesh than with other mesh.

One animal died less than two weeks after implantation. Researchers said the mesh caused bowel obstruction and was to blame. Studies also show that the coating interferes with tissue growing into the mesh.

“After 30 days there was a significant increase in adhesions and immune response around the mesh implants.”

A 2016 case study looked at a 61-year-old woman who received C-QUR mesh for an incisional hernia repair. After 10 months, she complained of pain and upper abdomen discomfort.

The authors performed a revision surgery. They found thick, oozing adhesions around the mesh.

The doctors removed the mesh and part of her stomach. They determined that the mesh and fish-oil coating created an inflammatory response. They also blamed it for the adhesions.

Atrium cited “excessive humidity for an extended period of time” in its recall notice. The problem could cause the mesh coating to stick to its “inner handling sleeve.”

The FDA received C-QUR complications reports as early as 2008. The agency inspected the C-QUR manufacturing plant four times between 2009 and 2013.

The FDA sent Atrium a warning letter in 2012. Warning letters are among the most serious actions the FDA takes against manufacturers.

The letter cited manufacturing and sterilization issues. Inspectors reported human hair and other foreign matter in supposedly sterilized C-QUR. The letter accused Atrium of changing its manufacturing process without testing the changes.

A 2013 inspection turned up similar violations to what the FDA found in earlier ones. Atrium had promised to fix those problems following each inspection.

Because it did not, the FDA decided to take stronger action. The agency and the Department of Justice sought an injunction against Atrium. A court agreed and blocked C-QUR manufacturing until Atrium fixed the problems.

MDLs combine several similar lawsuits. They can move through the legal process more quickly and efficiently.

The MDL panel selected the District of New Hampshire as the court for C-QUR litigation. People had filed several of the lawsuits in the district already. Atrium is also headquartered there.