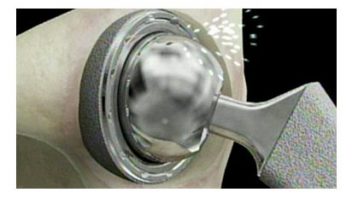 A new study published in The Lancet finds that high early failure rates of metal-on-metal hip implants are not limited to one design or manufacturer, but rather may be related to the entire class of devices.

Less surprising news is that the data from the world’s largest joint replacement registry show that all-metal hip implants have early failure rates that are two to four times higher than implants made with ceramic or plastic parts.

The study, which analyzed data from the National Joint Registry of England and Wales, tracked more than 31,000 metal-on-metal replacement hips implanted in patients in the U.K. between 2003 and 2011. The registry also includes information on more than 371,000 hip systems made from other materials.

The study excluded the DePuy Orthopaedics ASR implants, 93,000 of which were recalled in August 2010. The devices included in the recall are the ASR XL Acetabular System, a socket used in total hip replacement surgeries, and the ASR Hip Resurfacing System, a partial hip replacement used to preserve the bone. Together, the devices created excessive friction, releasing metal fragments into patients’ blood.

DePuy recalled the devices after researchers found 13 percent of patients would need a second corrective surgery within five years. The ASR metal hip implants were used between 2005 and mid-2010.

The new British study shows that 6.2 percent of patients with all-metal implants needed corrective surgery, usually to replace the implant, within five years. Furthermore, it also validates previous claims that women were more likely to need revision surgeries, as are patients who received their implants around 2004, when many artificial hips were redesigned to include a larger head, or ball, of the joint. According to researchers, the larger the head of the joint, the earlier the all-metal device failed.

The study’s authors say that because of the findings, metal-on-metal hip implants should be banned. “Metal-on-metal stemmed articulations give poor implant survival compared with other options and should not be implanted,” Ashley Blom of the University of Bristol and his colleagues wrote. “All patients with these bearings should be carefully monitored, particularly young women implanted with large diameter heads.”

Another recent study by researchers at the University of Bristol links faulty metal-on-metal hip replacement systems to possible kidney cancer and bladder cancer. The findings suggest that the metal shavings made up of cobalt and chromium — produced when parts grind against each other — cause changes to cells that could be precursors to cancer in 20 percent of patients with all-metal hip-replacement systems. In addition, the metal particles have been blamed for tissue damage, tumors, high metal ion blood counts and metal blood poisoning.