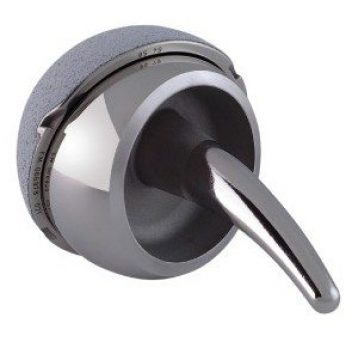 Patients are being warned by United Kingdom health officials about another defective and dangerous DePuy Orthopaedics metal-on-metal hip implant.

The Medicines and Healthcare products Regulatory Agency (MHRA) issued a medical device alert for DePuy’s MITCH acetabular cup used with uncemented Stryker Accolade femoral stems. The combination has a high revision rate, and surgeons have been advised to stop using it.

Four years after implantation, the revision rate of the combination is 10.7 percent, according to the England and Wales National Joint Registry (NJR). Furthermore, the cumulative revision rate for MITCH TRH hip resurfacing systems is 8.8 percent, which is higher than what the U.K.’s National Institute for Health and Clinical Excellence (NICE) considers acceptable.

In addition to recommending doctors stop using the DePuy MITCH TRH-Stryker Accolade hip implant, MHRA also indicated that patients who received the combination should be tested annually for signs of elevated cobalt and chromium blood levels, which are often the result when the all-metal parts of the implant grind against each other, producing metal shavings.

Metallosis — the build-up of metallic debris in the soft tissues of the body — has long been questioned with hip implants, but researchers were unsure of its specific damage. A recent study presented at the British Hip Society conference links metal-on-metal hip implant systems to possible kidney cancer and bladder cancer, The Telegraph reports.

The metal shavings released when the components rub against each other could cause changes to cells that could be precursors to cancer. In addition, the metal particles can cause tissue damage, tumors and metal poisoning.

The MHRA recommends that patients who have elevated cobalt and chromium blood levels be retested after three months. If high levels of metal ions are detected, the agency indicates patients will need to follow up with an ultrasound or MRI.

This news is another blow to DePuy, which is still dealing with the fallout from recalling 93,000 ASR metal hip implants in August 2010. The worldwide recall included its ASR XL Acetabular System total hip replacement and ASR Hip Resurfacing System. For patients, it’s yet another reason to be wary of all-metal hip implants.