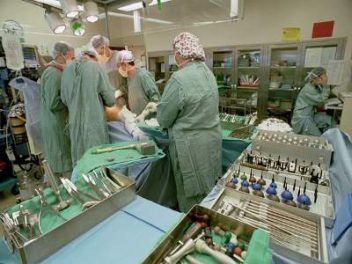 Candidates for total hip replacement (THR) surgery should carefully weigh the risks, especially because a new, extensive study has found a much greater risk for stroke immediately following the procedure.

According to U.S. News & World Report, elderly patients in the study were found to have 4.4 times the risk of bleeding in the brain (hemorrhagic stroke) and a 4.7-fold elevated risk of blocked blood flow to the brain (ischemic stroke) in the two weeks after surgery. The research was published online Nov. 6 in Stroke: Journal of the American Heart Association.

Evaluating the Risk of Stroke

The increased risk for ischemic stroke remained up to six weeks after the hip surgery and up to three months for hemorrhagic stroke. After those time periods, the risk declined and then returned to normal one year after the procedure, said study lead author Frank de Vries, an assistant professor of pharmacoepidemiology at Utrecht University in the Netherlands.

De Vries and his colleagues also found that taking aspirin lowered the risk of stroke in hip replacement patients up to 70 percent, but no other drugs affected the increased risk.

“This is the first study to evaluate the risk of stroke in patients undergoing total hip replacement compared to people in the general population who did not undergo the surgery, but were matched for age, sex and geographical region,” de Vries said in a news release.

The study analyzed data from more than 66,000 hip implant patients in Denmark and almost 200,000 people who did not have the surgery and served as controls. Participants in the study were, on average, 72 years old, white and female.

“There is an increasing tendency to decrease the length of hospital stay because of improved therapy and because of strategies to reduce costs and mobilize patients as soon as possible,” de Vries said. “It makes sense to evaluate the risk of stroke two weeks after surgery.”

In recent years, hip replacement patients also have found themselves dealing with other serious complications after their surgeries. Metal-on-metal hip implants — such as the Depuy ASR, DePuy Pinnacle, Zimmer Durom Cup and Stryker Rejuvenate and ABG II — have been widely used throughout the world and have failed in record numbers in as little as two years after implantation, requiring painful revision surgeries. Typically, hip devices have an average lifespan of 15 years.

In addition, the hip devices have been found to shed metal particles when the components grind each other, poisoning the bloodstream. Researchers are investigating whether the metal shavings have other risks, too, when they become embedded in nearby tissues. At least one British study found that the condition created an increased risk for kidney and bladder cancers.