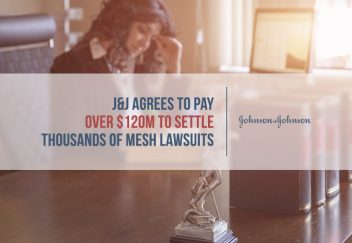 The company agreed to settle as many as 3,000 cases for more than $120 million, according to Bloomberg’s anonymous sources. Women who filed the suits say they suffered complications because of the implants manufactured by J&J’s Ethicon unit and said the products were faulty.

Transvaginal mesh — also called surgical mesh — started hitting the market in the 1990s. Surgeons insert a net-like piece of plastic through the abdomen or vaginal to treat incontinence or to support sagging pelvic organs in women. Since then, tens of thousands of women claimed they suffered injuries from the synthetic plastic cutting through organs and eroding through the walls of the vagina. Often, the injuries take multiple surgeries to fix.

While the J&J quietly settled a few cases, this marks the first blanket settlement. Unlike other companies such as American Medical Systems and Coloplast that paid about $1 billion to settle a substantial portion of their cases, J&J made no move to negotiate with plaintiffs.

“From time to time we have appropriately agreed to resolve some cases,” Ernie Knewitz, a J&J spokesman, said in an e-mailed statement to Bloomberg. “We will not discuss the terms, nor discuss our ongoing litigation strategy.”

According to the company’s regulatory filings, there are still more than 42,000 lawsuits pending. J&J made no comment about settling those cases or continuing to fight them in trial.

This is not the first time J&J and Ethicon have shelled out millions to plaintiffs. Juries ordered the mesh maker to pay $3.27 million to Jo Husky in 2014 and two women won $11 million and $1.2 million in 2013.

J&J isn’t the only company paying out millions to resolve lawsuits.

C.R. Bard, who faces about 12,500 federal lawsuits, also had several noteworthy jury verdicts against it, starting with Christine Scott’s $5.5 million win in 2012. Bard appealed the verdict and it was upheld. Judge Joseph Goodwin who presides over all federal mesh cases asked Bard, J&J and others to settle their cases to avoid “billions in jury verdicts.”

Boston Scientific is another big mesh producer who felt the sting of trial losses. In 2014, a Texas state jury ordered the device maker to pay $73 million to Martha Salazar after it found the company “grossly negligent.” Punitive damages made up $50 million of the damage award.

Since 2011 when the FDA first reported that it received thousands of adverse event reports, the controversy surrounding the device has grown. A number of online support groups sprung up, including several Facebook groups made up of mesh-injured women.

In January 2016, the FDA reclassified mesh implants for use in pelvic organ prolapse from class II, moderate risk devices, to class III — these devices are high-risk and may potentially cause harm or death. Previously, manufacturers of these implants could sell them without extensive testing.

Manufacturers will have to prove the safety and efficacy of their products to the FDA through data from clinical trials.