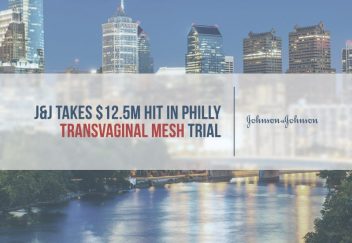 Johnson & Johnson’s Ethicon unit took a multi-million dollar trial loss over its transvaginal mesh implant at the end of last year, and 2016 started off with the Food and Drug Administration re-classifying the controversial surgical implant to a high-risk device.

Patricia Hammons filed a lawsuit against J&J and its Ethicon subsidiary and claimed that the Prolift mesh implant caused her to suffer a variety of health problems and left her unable to have sex. Hammons, a Wal-Mart stocker from Indiana received mesh to treat a leaky bladder, but required multiple surgeries to treat complications. Even after revision surgery, she continued to suffer problems.

The two-and-a-half-week trial in Philadelphia Common Pleas Court before Judge Mark Bernstein ended with a $12.5 million jury verdict for Hammons, $5.5 million in compensation for complications and $7 million in punitive damages. The jury awarded punitive damages to punish J&J for selling an unsafe product.

“Every American depends on Johnson & Johnson to put safety ahead of selling,” Hammons’s lawyer, Shanin Specter told the Philadelphia Inquirer. “They aren’t doing that, and they need to engage in some honest soul-searching.”

In response, Ethicon’s spokesman issued a statement, “We believe the evidence showed Ethicon’s … pelvic organ prolapse repair kit was properly designed, Ethicon acted appropriately and responsibly in the research, development and marketing of the product, and the [mesh] was not the cause of the plaintiff’s continuing medical problems. We have always made patient safety a top priority and will continue to do so.”

Ethicon plans to appeal the verdict.

Part of the issue with the implant is that it was never designed to come out of the body. During the trial, one plaintiff’s expert described removing faulty mesh from a woman’s body as a surgical “train wreck.”

According to Scott Ciarrocca, an Ethicon product engineer who testified during the trial, the company never came up with a procedure to remove the implants if they failed. The implant was a huge financial success for Ethicon, and it raked in $108 million. The company pulled it from the market in 2012.

Evidence presented at the trial showed Ethicon knew about painful sex complications from mesh since 2005, but did not include a warning on the label.

J&J’s lawyer, Tarek Ismael, admitted the company made mistakes in the development of the Prolift but claimed it never wanted to cause harm.

Five years after it released its first warnings on mesh, the FDA is finally making a move to reclassify the device. Previously, the agency classified the products as class II, meaning they were moderate risk devices. Many of the mesh products on the market were cleared through the 510(k) process and could be marketed without testing as long as another similar product was already on the market.

The first week of January 2016, the FDA announced it reclassified mesh used to treat pelvic organ prolapse as a class III, meaning manufacturers must now provide data showing the product is safe and effective before sale.

Across social media, mesh support groups are calling for the FDA to reclassify all mesh. Under the new regulations, mesh devices like the Prolift bladder sling used by Philadelphia plaintiff Hammons are still class II devices and do not require testing.

“These stronger clinical requirements will help to address the significant risks associated with surgical mesh for repair of pelvic organ prolapse,” William Maisel, M.D., M.P.H., deputy director of science and chief scientist for the FDA’s Center for Devices and Radiological Health said in a statement. “We intend to continue monitoring how women with this device are faring months and years after surgery through continued postmarket surveillance measures.”