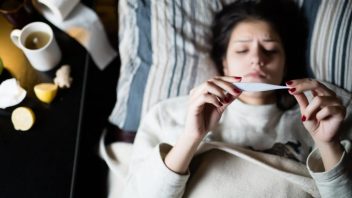 This year’s influenza season is getting off to a brutal start, and making things worse, the flu vaccine is expected to be less effective than in past years, according to Anthony S. Fauci, director of the National Institute of Allergy and Infectious Diseases at the National Institutes of Health.

Fauci and other experts recently published a piece in the New England Journal of Medicine noting that Australia, which is seasonally six months ahead of the United States, had record-high numbers of confirmed influenza cases and outbreaks and higher-than-average numbers of hospitalizations in deaths.

The U.S. season is getting off to a roaring start, with serious outbreaks in the Southeast, particularly Mississippi and Louisiana. While the season starts in the fall, “you don’t get intense outbreaks until the end of December, beginning of January,” Fauci said.

In addition, the flu vaccine was just 10 percent effective in Australia.

If the vaccine does turn out to be only 10 percent effective, that would be the worst year for flu vaccine effectiveness in the U.S. since 2004-2005, according to statistics from the Centers for Disease Control and Prevention.

Last year’s vaccine was estimated to be 48 percent effective, while in 2014-15, the effectiveness was 19 percent.  The highest effectiveness year reported was in 2010-11, when it was 60 percent.

In 2014-15, there was also a vaccine mismatch, according to the New England Journal of Medicine report, resulting in “substantial related morbidity and mortality among people over 65 years of age.”

Flu vaccines are unlike other vaccines, which are much more effective, Fauci said. For example, the measles vaccine is 98 percent effective.

It’s too late, Fauci said, to make improvements to the influenza vaccine in time for this year’s flu season. That’s why scientists are on a perennial search for the elusive “universal flu vaccine” that would work for all strains of the flu virus.

This has proved impossible thus far, Fauci said, because the flu virus changes so often.

The reason this year’s vaccine was so ineffective is that when it was being cultured, when it was put in eggs to grow, the virus mutated to adapt to the environment. “When it adapted itself, it became a different virus,” Fauci said. “It was sort of an accidental mismatch.”

So what does 10 percent effective mean?

If you take a group of people who were vaccinated and the same number who weren’t, he explained, there would be 10 percent fewer people who got the flu in the vaccinated group.

Additionally, the people who were vaccinated would also experience other benefits across the board, including the possibility that those who were sick may be less seriously ill.

Even with an effectiveness of only 10 percent, the advantages of the vaccine far outweigh any “minuscule” possibility of negative effects, Fauci said. “The vaccine is extremely safe,” he said. “It is always best to get vaccinated than not to get vaccinated.”

Each year, seasonal flu causes 3 to 5 million severe cases and between 300,000 and 500,000 deaths around the world, according to information from the World Health Organization cited in the Fauci’s piece in the New England Journal of Medicine. In the United States, there are 140,000 to 710,000 hospitalizations related to influenza and between 12,000 and 56,000 deaths annually. The most affected are the very young, the very old and people with existing medical conditions.

As the authors of the piece in the New England Journal of Medicine wrote, “However imperfect, though, current influenza vaccines remain a valuable public health tool, and it is always better to get vaccinated than not to get vaccinated. In this regard, the CDC estimates that influenza vaccination averted 40,000 deaths in the United States between the 2005–2006 and 2013–2014 seasons.”

For the second year in a row, the CDC is warning against the nasal mist vaccine, saying it doesn’t work.

Researchers at Johns Hopkins Bloomberg School of Public Health say they have figured out the problem with the FluMist vaccine, and a possible solution.

The school reports that researchers have discovered a genetic mutation in the vaccine that may be altered to enhance the vaccine’s protective effect.

The researchers say they found a mutation in two of the viral strains used in the vaccine that reduces virus production. When they reversed the mutation in one of the viruses, the virus began making copies of itself more quickly in cultured human nasal cells, leading to stronger production of immune proteins.