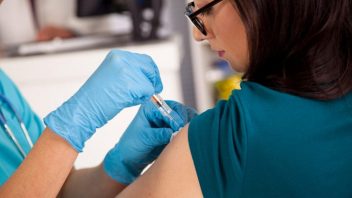 Nearly two-thirds of U.S. adults say they get the flu vaccine each year or plan to get one in 2017, according to a July 2017 survey by Harris Poll on behalf of CVS Pharmacy.

The U.S. government recommends everyone 6 months of age and older gets a flu vaccine each season before flu season is in full swing. Flu season in the U.S. runs October through May.

According to the 2017 survey, fall months are the most popular time for Americans who have gotten a flu shot in the past to get another one. Thirty-six percent said they get vaccinated in October, making it the most popular month for flu shots.

The U.S. Food and Drug Administration decides which vaccine viruses can be included in the flu vaccines sold in the U.S. Flu viruses change, so flu vaccines may need to be updated to be effective.

“All 2017-18 influenza vaccines licensed in the U.S. will contain hemagglutinin (HA) derived from influenza viruses antigenically similar to those recommended by FDA,” according to the U.S. Centers for Disease Control and Prevention.

Hemagglutinin is a protein found on the surface of the influenza virus that helps the virus bind to cells and infect them. The goal of the flu vaccine is to stimulate the body’s immune system so that it builds antibodies that will protect the body if exposed to the virus in the future. The process of developing that protection in the body takes about two weeks.

Other Ways Americans Protect Themselves from the Flu

Two in three — or 67 percent of — surveyed Americans who received a flu vaccine last year or plan to get one this year said getting the vaccine is the best way to prevent getting the flu. Even so, more Americans said they are taking other preventative actions to protect themselves from the flu.

According to the Harris Poll survey: