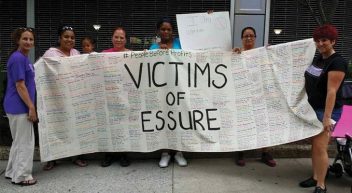 ‘E-Sisters’ at a previous protest with a banner featuring the names of Essure recipients.

Bayer announced Friday that it would stop selling Essure birth control in the U.S. by the end of 2018.

The pharmaceutical giant said it is not pulling the implant for safety reasons. Instead, the company blamed “inaccurate and misleading publicity” for poor sales.

The decision to pull the device comes after the FDA restricted sales of the device in April 2018.

“The decision today to halt Essure sales also follows a series of earlier actions that the FDA took to address the reports of serious adverse events associated with its use,”  Scott Gottlieb, the commissioner of the U.S. Food and Drug Administration, said in a statement. “For women who have received an Essure implant, the postmarket safety of Essure will continue to be a top priority for the FDA.”

It is an emotional moment for patient advocates who have been fighting to remove the device from the market.

“Seven long years of fighting to get Essure off the market has finally paid off,” Essure Problems founder Angie Firmalino told Drugwatch. “Today’s announcement that Bayer will be pulling Essure from the market here in the U.S. has brought us all to our knees in thanks, relief and celebration.”

The Essure device consists of two metal coils implanted in the uterus to prevent pregnancy.

Thousands of American women claimed the device injured them and caused complications ranging from hair loss to organ perforation. These complications led women to file Essure lawsuits against Bayer.

The U.S. was the last country where Essure was available.

The decision to remove Essure from the market is a major victory for women’s health, according to patient advocates.

“Not one more woman will be harmed by this device,” Firmalino said. “We have won. We have finally won.”

Firmalino and fellow Essure Problems members were featured in the upcoming Netflix original documentary The Bleeding Edge. On July 17, 2018, the group protested Essure by screening the film outside Bayer’s headquarters in New Jersey.

In February 2018, they presented adverse event data to Gottlieb and other FDA officials. Shortly after, FDA placed sales restrictions on the device.

The FDA had also required Bayer to conduct postmarket studies on Essure’s safety and effectiveness. Bayer is supposed to present the data by 2023.

Gottlieb said the FDA remains committed to women with Essure.

“I want to stress that, even when Essure is no longer sold, the FDA will remain vigilant in protecting patients who’ve already had this device implanted,” Gottlieb said. “We’ll continue to monitor adverse events reported to our database, as well as other data sources.”