Prescription Drug Deaths on the Rise 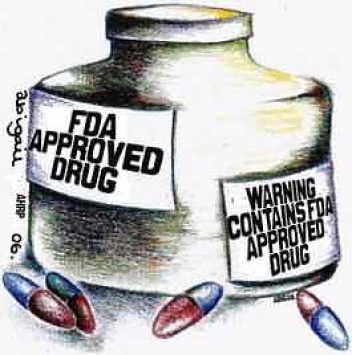 The statistics and the facts are staggering: More than 40 people a day across the country die from prescription pain medication overdoses; more and more doctors are getting huge payouts from pharmaceutical companies to promote these drugs; and in the past 10 years, U.S. spending on prescription drugs rose 475 percent.

The relationship between doctors and pharmaceutical Goliaths has reached the point of being suspiciously cozy, ethically questionable and life-threatening to unsuspecting patients at risk of drug addiction and death. And those most affected aren’t who you think.

Gone are the days when society’s drug addicts are the strung-out junkies living in crack houses – people you see on the 11 o’clock news. No, many of today’s addicts are your neighbors, church friends and children – maybe even your own children. And many of them got their start from their own trusted physicians.

Dr. Thomas Frieden, director of the Centers for Disease Control and Prevention (CDC), told Fox News that doctors are handing out narcotics like candy. Some doctors are giving patients prescriptions for narcotics for minor injuries when other medications could work just as well.

“When I went to medical school, we were incorrectly assured, ‘Don’t worry, if patients have short-term pain, they won’t get hooked. That was completely wrong, and a generation of doctors, patients and families learned that’s a tragic mistake,’ ” Frieden told Fox News.

In November 2011, the CDC, the country’s national public health institute, announced that deaths from prescription drugs more than tripled in the past decade. Nationwide, the most abused medications are narcotic pain relievers like hydrocodone (Vicodin) and oxycodone (OxyContin); depressants like diazepam (Valium); and stimulants such as Adderall.

“Almost 5,500 people start to misuse prescription painkillers every day,” said Pamela S. Hyde, the administrator of the Substance Abuse and Mental Health Services Administration (SAMSHA), which is part of the U.S. Department of Health and Human Services.

Prescription painkiller deaths are highest in the 35-to-54 age group, with the highest concentrations in New Mexico, followed by West Virginia, Nevada, Utah and Alaska. The highest abuse rates are in Oklahoma, then Oregon, Washington, Rhode Island and Kentucky.

Medical professionals say the propensity toward abuse, addiction and sometimes death is caused by misplaced trust. Patients often assume that because prescription drugs are monitored by organizations such as the U.S. Food and Drug Administration and are given under doctor’s orders, they are always safe.

Not so, says Dr. Peter Delany, director of SAMSHA’s Center for Behavioral Health Statistics and Quality.

“A lot of people think that because you need a prescription, it must be a pretty safe drug. But it’s addictive. Even if you take them the way they’re prescribed. You can build up a tolerance pretty quickly,” Delany told ABC News.

To add more uncertainty to the issue, the relationship between physicians and pharmaceutical drug companies has many wondering who to trust.

In 2010, the non-profit investigative journalism group ProPublica found that prescription drug companies paid out some $250 million to 17,000 doctors and nurses nationwide in a two-year period.

The harrowing effects of prescription drugs go deeper than narcotics like Vicodin and OxyContin. The problems come in all forms, from non-habit forming birth control pills and vanity drugs such as Botox.

Bayer AG, the maker of the birth-control pill Yaz, is facing a myriad of lawsuits over claims the drug causes life-threatening blood clots. Medical professionals found that women taking the pills were 74 percent more likely to suffer blood clots than those taking low-estrogen contraceptives. The FDA reported at least 50 deaths were tied to Yaz (Crisanta LS), a combination birth control pill.

Other drugs like Botox long have been used for cosmetic purposes with little regard for safety. Botox, which uses a botulinum toxin to relax muscles, is used to smooth wrinkles. But in some cases, the drug is known to migrate through the body, causing paralysis, weakening breathing muscles and death.

Botox also has off-label uses that have been condoned by medical professionals. In 2010, a 7-year-old died after beginning Botox treatments for cerebral palsy.  Despite the risks, the American Academy of Neurology said that drugs like Botox are “generally effective and safe” for cerebral palsy symptoms.

Recently, the Journal of the American Medical Association (JAMA) found that the incidence of serious or fatal drug reactions in U.S. hospitals was “extremely high.” JAMA also found that more than 2.2 million Americans required hospitalization in one year because of serious reactions to medications. Even more disturbing was that more than 106,000 hospitalized patients die each year because of prescribed drugs.

In 2011, the White House recognized prescription narcotic and opioid abuses as a problem and aimed to mitigate it. The goal is meager – cut misuse by 15 percent in five years – but attainable, officials said.

The program will include stepped up enforcement, education programs and pill-tracking databases, especially in Florida, where 85 percent of the nation’s oxycodone pills are prescribed.

During the past decade, Florida – with its lax laws and flimsy legislation – became the destination of choice for those seeking quick and easy prescription drugs. Seven people die each day in Florida as a result of prescription overdoses.

As a result, medical professionals and government watchdogs are now scurrying to seal the cracks in the state’s prescription drug regulation by putting a clamp on pain management clinics and creating a pill-tracking database.

In New Mexico, another state with daunting problems, some physicians are being likened to drug dealers with medical degrees. Officials have been working to implement education programs and early intervention plans to help children understand that medicine-cabinet drugs are as dangerous as street drugs. It’s not clear if it has had any impact.

With the legislative wheel turning slowly, more patients are turning to attorneys to help muddle through the confusing world of medication interactions and the physicians role in it.