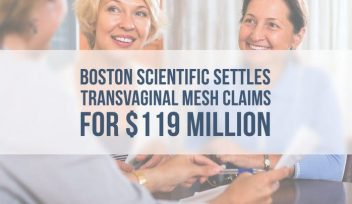 Boston Scientific started off 2015 by posting a first-quarter loss, in part because of litigation woes related to its transvaginal mesh products that women claim caused them permanent injuries.

This week the Massachusetts-based company announced it would pay about $119 million dollars to settle just under 3,000 transvaginal mesh lawsuits, the Wall Street Journal reported. This marks the first settlement from the company in its ongoing litigation over the implants.

The device maker already racked up several jury loses, including one Texas case where the jury ordered the company to pay $35 million to the plaintiff and another for $26.7 million in Miami.

Transvaginal mesh implants are net-like pieces of plastic that resemble the same products used in hernia surgeries. They are typically the size of credit cards but can be larger or smaller.

Surgeons use mesh to hold up sagging organs in women after childbirth or injury and also use it as a surgical treatment for urinary incontinence. In lawsuits, women claim they suffered complications from the mesh cutting through other organs, painful sex, nerve pain and infections.

Boston Scientific is one of several companies embroiled in federal and state litigation over mesh. According to regulatory filings, the company reported it still faces more than 25,000 claims.

The total number of federal lawsuits consolidated in multidistrict litigation — encompassing all defendants and multiple mesh products — before Judge Joseph R. Goodwin exceeds 72,500, making this one of the largest mass torts in American history.

Other companies involved in the litigation include Johnson & Johnson’s Ethicon unit, which faces the largest number of claims, C.R. Bard and American Medical Systems – an Endo International subsidiary.

Boston Scientific CEO Michael Mahoney told the Journal that despite this week’s courtroom loss, the company continues to grow and will contest its remaining mesh claims. He also said, however, that the company would “settle cases at reasonable terms when appropriate.”

Multiple mesh makers were hit with multi-million-dollar jury verdicts. Boston Scientific absorbed the settlement blow, though its $119 million settlement did not constitute an admission of guilt. The money will be available in an escrow account by October 1 for claimants to participate.

“If I were a stockholder of any of these companies, I would be materially interested in the fact that there have been multiple million-dollar verdicts for individual plaintiffs,” the judge said, according to Bloomberg. In February, Goodwin said litigation loses could push C.R. Bard into bankruptcy.

American Medical Systems was the first company to pay millions to settle claims against it. Originally it set aside $159.8 million in 2013. It underestimated its liability and ended up paying out $54 million and then an additional $830 million. According to Goodwin, other companies should emulate AMS in its willingness to settle.

In February, the judge met with attorneys to try and speed up resolution of these cases and send more to trial as quickly as possible.

News of the $119 settlement comes shortly after Judge Goodwin denied Boston Scientific its request to throw out punitive damages in the case of Sharon Pelskey. In her lawsuit, Pelskey claims she was injured by the Advantage Fit mesh sling, Fierce Medical Devices reported.

The device maker said the plaintiff did not show sufficient proof of malice or criminal indifference. Goodwin sided with the plaintiff and allowed the claims to remain.