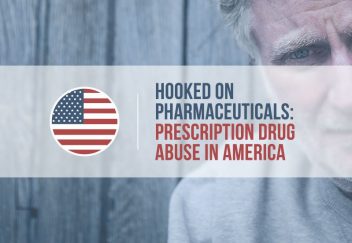 It kills more people than car accidents every year. The Centers for Disease Control and Prevention (CDC) classified it as an epidemic and the World Health Organization (WHO) reported it threatened the achievements of modern medicine.

Prescription drug abuse is a global problem, and the U.S. is the world’s biggest addict.

Major causes of preventable death – like car accidents – have been on the decline, but deaths from drug abuse doubled in the last decade, according to the L.A. Times.

The stats are alarming:

According to the Substance Abuse and Mental Health Services Administration (SAMHSA), more than 6.5 million people above the age of 11 used prescription drugs for non-medical reasons in 2013. That’s more than cocaine (1.5 million), hallucinogens (1.3 million) and heroin (681,000) combined.

While painkillers are the leading cause of accidental death, abuse of antibiotics led to the development of super bugs and antidepressant prescriptions rose more than 400 percent from 2005-08.  Meanwhile, the pharmaceutical industry brought in more than $1 trillion last year, a number that’s grown every year since 2005.

Despite the growth of public awareness about the problem, the abuse isn’t stopping. Anti-drug abuse organizations claim the public still possesses a major misconception about prescription drugs, believing that since doctors prescribe them they aren’t dangerous.

That couldn’t be further from the truth.

Prescriptions Are as Dangerous as Illicit Drugs

Prescription drug abuse refers to using a drug without a prescription, in a way other than as prescribed or to get high, according to the National Institute on Drug Abuse (NIDA).

Not all abusers take drugs to get high or relieve a medical condition. People also take drugs to improve focus, although there is little scientific evidence that proves drugs improve cognitive function, according to NIDA.

When taken as recommended, prescription and over the counter drugs treat specific mental or physical symptoms. Even then, some drugs have dangerous or unintended side effects that cause more harm than good.

When prescription drugs are used in ways other than prescribed or when symptoms aren’t present, they can affect the brain like illegal drugs do, according to NIDA.

Like illicit drug users, prescription drug abusers often hope to achieve pleasure from the side effects of the drugs because the drugs can increase the amount of dopamine in the brain. However, this can cause the prescription drug user to want to continue to feel that pleasure, leading to addiction.

Almost 70 percent of Americans take at least one prescription drug, and more than half take two, according to researchers at the Mayo Clinic and Olmsted Medical Center.

The most commonly prescribed drugs among those studied were opioids (13 percent), antidepressants (13 percent) and antibiotics (17 percent).

“Often when people talk about health conditions they’re talking about chronic conditions such as heart disease or diabetes,” Dr. Jennifer St. Sauver said in a press release. “However, the second most common prescription was for antidepressants — that suggests mental health is a huge issue and is something we should focus on. And the third most common drugs were opioids, which is a bit concerning considering their addicting nature.”

Examples of synthetic opioids include:

Antidepressants can have both minor side effects – headaches, upset stomach or nausea – and major side effects – involuntary movements, loss of sexual desire and suicidal thoughts – according to the Harvard Medical School.

After studies found antidepressants might double the risk of suicidal thinking, the U.S. Food and Drug Administration issued a Black Box Warning mentioning the risk for suicidal thoughts, hostility and agitation in children and adults.  Antidepressants may also lead to birth defects if taken by women who are pregnant.

Examples of synthetic antidepressants include:

Abuse often includes incorrectly using antibiotics to fight illnesses caused by viruses (such as the common cold) in humans. Researchers estimate that half of antibiotic use is unnecessary, according to Harvard Magazine.

Examples of antibiotics include:

America’s journey to addiction wasn’t the same for each type of drug. The path for some types of drugs, like antidepressants and antibiotics, began more than 50 years ago. The road for other types, like stimulants and pain killers, began more recently.

How We Got Hooked

Regardless of when each drug type was discovered or developed, the paths to high-quantity prescriptions and dependencies all collided in the 21st century.

The Race Between Scientists and Bacteria

Meanwhile, the over-prescription of antibiotics was getting worse. Researchers knew bacteria could develop resistance to the drugs when penicillin was first discovered in the 1940s, according to Harvard Magazine.

What followed was a race between scientists developing new antibiotics and bacteria adapting to them. By 1955, researchers found four strains of a bacteria to be resistant to the current antibiotics. Methicillin was introduced in 1960, and scientists discovered strains of Methicillin-resistance staphylococcus aureus (MRSA) two years later. As antibiotics were introduced and the bacteria adapted, a more deadly strain of MRSA developed. In 2005, almost 20,000 people died from MRSA infections – more than HIV and tuberculosis combined, according to Harvard Magazine.

Despite guidelines for its use, doctors still prescribe antibiotics to treat colds and coughs because of miscommunication with patients about their symptoms.

The Path to Painkillers

America’s path to its most deadly addiction stemmed from an increased effort to find ways to treat chronic pain in the 1990s.

Following the introduction of guidelines for the management of chronic pain by a pair of expert panels in 1997, the Federation of State Medical Boards encouraged policies to promote compassionate pain management. The states followed by enacting regulations, guidelines and policy statements for improved pain management, according to a Journal of the American Medical Association (JAMA) article.

Unfortunately, the population that most often suffers from chronic pain is also one of the most vulnerable to addiction.

The elderly are one of the biggest groups of prescription drug addicts in the U.S.

Adding to the concern, many of the 1.3 million elderly people living in nursing homes in the U.S. take pain killers to manage chronic pain. However, opioids and depressants are not recommended for long-term use because they lose their effectiveness over time.

The problem was so severe that the Centers for Medicare and Medicaid Services (CMS) and American Health Care Association (AHCA) began initiatives to reduce the use of antipsychotics, a type of depressant, in nursing homes in 2012. The initiative reduced the use of the drugs by 15 percent during the next two years.

The elderly are not the only worrisome age group abusing prescriptions either.

Abusers of the Future: America’s Children

Often, the pattern for drug abuse begins when people are exposed to drugs during adolescence.

Exemplifying the misconception regarding the safety of prescriptions, a SAMHSA survey found more than half of the people aged 12 and older who abused prescriptions in 2012-13 got the drugs from friends or family members for free.

The Cost of Prescriptions

The amount of money in the prescription drug market is colossal.

According to IMS Health, a company which provides data on the healthcare industry, pharmaceutical companies totaled more than $1 trillion in sales in 2014. Big Pharma global sales increased by at least three percent every year since 2005.

While billions of dollars made from prescription drugs flow into Big Pharma’s pockets, some cities and states claim the companies are responsible for the country’s drug addiction.

Companies included in the lawsuits include: Purdue, Endo, Actavis, Cephalon and Janssen (A subsidiary of Johnson & Johnson).

When prescribed and taken responsibly, the majority of prescription drugs treat symptoms, cure illnesses and save lives. However, the misleading of consumers by pharmaceutical companies, misdiagnosis of patients by doctors and a misinformed public have led to a country filled with millions of prescription drug abusers.

The steps to avoiding prescription drug abuse are simple:

On Oct. 21, 2015, President Obama announced a plan in partnership with several federal agencies and professional medical associations to combat opioid abuse in the U.S.

The plan would require federal healthcare providers to receive training about prescribing opioids and prevent barriers to treatment for opioid addiction.

“We’re ensuring that federal agencies train federal health care providers who prescribe opioids,” Obama said. “Congress should follow that lead and make this a national priority, and we look forward to working with governors and the medical community as well.”

But many experts don’t believe Obama’s plan will have enough impact.

“I don’t think that either of these … actions will have much impact,” Dr. Una McCann of John Hopkins told MedPage Today. “Sadly, the physicians who think nothing of prescribing opioids – or benzodiazepines or stimulants – to their patients will not be impacted, nor will the physicians who prescribe them in good conscience.”

Numerous organizations ranging from the American Medical Association to the Fraternal Order of Police and from the Partnership for Drug-Free Kids to the Dr. Oz Show announced plans to raise awareness in coordination with the White House initiative.