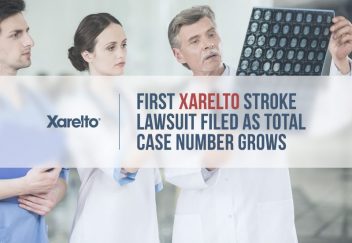 Hundreds of people filed lawsuits against Bayer and Johnson & Johnson claiming their blood-thinning drug Xarelto (rivaroxaban) caused them to suffer negative side effects like uncontrollable bleeding.

Now, the daughter of a Florida man who died from a stroke four days after he began taking Xarelto filed a lawsuit in Philadelphia claiming the drug did not work as advertised. It’s the first lawsuit claiming Xarelto failed to prevent a stroke in a patient with atrial fibrillation (abnormal heartbeat).

The U.S. Food and Drug Administration approved Xarelto to reduce the risk of stroke in patients with atrial fibrillation in 2011, but one FDA reviewer recommended against the drug’s approval.

“The data do not convincingly demonstrate that rivaroxaban (Xarelto) is as effective in preventing strokes and systemic emboli (blood clots) as warfarin when warfarin is used skillfully,” the reviewer wrote to the advisory committee in 2011. “If rivaroxaban is approved, patients taking it might be at greater risk of harm from stroke and/or bleeding.”

The lawsuit alleges Xarelto’s once-a-day dosing leaves patients vulnerable to blood clots and strokes for a portion of the day. Other anticoagulants are taken twice a day to improve the balance of the amount of the drug in the body throughout the day.

A 2014 study found the amount of Xarelto in a patient’s body fluctuated more than three times as much as a comparable anticoagulant, Eliquis (apixaban), taken twice daily.

The MDL in Louisiana contains 1,698 federal lawsuits, and the mass tort in Philadelphia contains more than 400 state lawsuits.

The first bellwether trial date is set for Feb. 6, 2017. Three additional trials are scheduled for the following March, April and May. Bellwether trials are the first cases to go before a jury. They often include cases that are representative of the claims made by other cases, so plaintiffs and defendants can determine how future trials will play out.

If defendants lose multiple bellwether trials, they usually look to settle large numbers of cases to avoid additional negative jury verdicts. If defendants know they have a weak case, they may settle bellwether cases before trials begin.

There are reports of more potential cases claiming Xarelto failed to prevent a stroke in patients with atrial fibrillation, but it’s too soon to know if the claims will be as widespread as the irreversible bleeding claims.