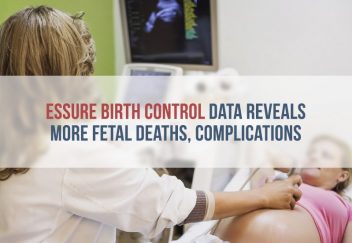 Essure is a permanent birth control device made up of metal coils and polyethylene fibers doctors insert into each fallopian tube. After about three months, the device causes scar tissue to form and block the tubes, preventing pregnancy. Bayer, the device’s maker, claims the device is safe and nearly 100 percent effective, but tens of thousands of women who belong to an Essure advocacy group call Essure Problems say the device caused them serious harm.

The list of complications includes organ perforation, device breakage, severe pain and autoimmune issues. There were 69 surgeries related to Essure this week alone, an Essure Problems administrator told Drugwatch. Many women are forced to remove the device.

The congressman highlighted what he called a problem with data reporting.

“When we talk about data reporting, we are talking about more than just numbers. We are talking about 303 unborn children who were killed because of a failure of a product. And, at the same time the deaths were not properly analyzed by the FDA.”

On Wednesday the congressman sent a copy of the report to the FDA’s Jeffrey Shuren, Director of the FDA’s Center for Devices and Radiological Health, and asked him to review “all of the adverse event reports received by those harmed by Essure as a part of the FDA’s on-going review of this device.”

In addition to problems with reporting adverse events with Essure, the congressman previously questioned hospitals and manufacturers about unreported deaths linked to power morcellators. Morcellators may spread undiagnosed uterine cancer in women who undergo hysterectomies and uterine fibroid removal with the device, according to the FDA.

While the congressman put a lot of pressure on the FDA to do its job, he also called out manufacturers and their responsibility.

“Manufacturers are required by law to report adverse events, could be an injury a death, a malfunction of the medical device,” Fitzpatrick told Drugwatch. “With respect to both devices I’ve spoken about, power morcellators…and the Essure contraceptive medical device, in both cases the manufacturers have information that the device has harmed women. It is their responsibility to report to the FDA.”

Fitzpatrick questioned the FDA’s policies, or lack thereof, for dealing with manufacturers who do not properly report information about problems with devices to the agency. Bayer immediately responded to the allegations.

“It is not true that an investigation revealed ‘unreported’ deaths with Essure. Bayer reports adverse events to FDA consistent with FDA regulations,” Bayer said in a statement. “Irrespective of the type of birth control a woman uses, when pregnancies do occur, there can be complications. It would be irresponsible to suggest that Essure causes fetal deaths when, after an unsuccessful Essure procedure, an undesired pregnancy cannot be carried to term.”

Bayer also called for transparency, stating that there is no way of knowing if all 27,000 members of the Essure group experienced adverse events from the device.

Madris Tomes of Device Events, who provided the adverse event data from FDA’s MAUDE database, explained how she pulled data for fetal deaths linked to Essure.

“When adverse events go to the FDA, ‘death’, ‘injury’ or ‘malfunction’ are the boxes you check,” Tomes said. She explained her system used keywords such as “fetal death”, “stillbirth,” “stillborn” and “miscarriage” to go deeper into the narrative of each report. Tomes told Drugwatch that she combed her data thoroughly before providing it to the congressman’s office with the intention of spurring the FDA to verify their own data.

The women of Essure Problems also responded to Bayer’s statement.

“The truth is we compiled reports that we had found in the FDA MAUDE database that neither the FDA nor Bayer have made readily available to the public; reports of hundreds of fetal deaths, miscarriages, ectopic pregnancies, and spontaneous abortions,” Essure Problems said in a statement. “It is highly offensive that Bayer can speak of transparency and doubt the nature of the health complaints, in essence, calling us liars.   Virtually every single day at least 10 women in their 30s, 40s and even 20s are undergoing hysterectomies in order to have the device removed.”

In addition to the discrepancy in reporting, Fitzpatrick discussed some of the legal allegations against Bayer and Conceptus, Essure’s original manufacturer.

A previously sealed lawsuit filed in the Northern District of California against the device makers alleged Conceptus gave doctors about $20,000 in free equipment for the purchase of 25 or more Essure kits. The complaint also said the device company set up lunches and provided “free marketing and advertising services” to doctors to encourage them to use Essure.

“These allegations were made over a year ago and the United States Department of Justice thoroughly investigated them. After its investigation, DOJ declined to intervene and prosecute the case,” the company said in a statement.

Fitzpatrick and women harmed by Essure are not the only ones in favor of revoking the device’s premarket approval. Public Citizen, a D.C.-based consumer watchdog group attended the FDA’s September 2015 panel on Essure.

“Public Citizen recently testified before an FDA Advisory Committee asking that the FDA withdraw approval of the Essure device based on lack of reasonable assurance of safety and effectiveness,” Sarah Sorshcer of Public Citizen told Drugwatch. “Public Citizen has serious concerns about the data supporting approval of this device, and raised questions with the FDA about the design and conduct of the clinical trial upon which the FDA’s approval was based.”

Sorscher added, while Public Citizen supports the “efforts by Congressman Fitzpatrick to investigate adverse events related to the Essure device. Members of congress could be doing more to improve patient safety than simply investigating issues with individual devices.”

Devices such as Essure and power morcellators highlight more widespread failings by the FDA with regard to safety and effectiveness of medical devices. Sorscher hopes these incidents serve as a “wake-up call.”

For now, it is a waiting game for women injured by Essure as they await the FDA response and recommendations.

“At the end of this month, if the FDA fails us once again, congress has no choice but to force the hand of the FDA in revoking PMA of Essure,” Essure Problems administrator and co-founder Angie Firmalino told Drugwatch.