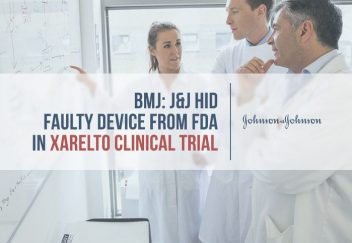 Johnson & Johnson’s Janssen Pharmaceuticals knew about a faulty device and data in a Xarelto (rivaroxaban) regulatory trial that suggests they put participants at risk, The BMJ reports.

Janssen withheld data about problems with the INRation device from the U.S. Food and Drug Administration, the investigators said. The device monitored patients using warfarin during phase III of the ROCKET AF trial and may have compromised data and patient safety. The FDA used data in this trial to approve Xarelto, now one of the bestselling anticoagulants on the market. In 2015, the drug made close to $2 billion for J&J, according to company reports.

The drug manufacturer set up a safety program called Covance that was intended to recheck data from the original trial after concerns surfaced about the faulty device. Janssen also failed to share this data with clinical-trial safety monitors.

In 2014, the FDA recalled the INRation device because it generated significantly lower results than lab methods, but J&J and Bayer did not tell authorities about the device until The BMJ investigation.

This new information could intensify current litigation against the drug giants.

Nearly 11,000 plaintiffs filed federal lawsuits against J&J, Janssen and Bayer — who co-developed the drug and markets it outside the U.S. — claiming the companies misled users about the safety and efficacy of the drug. Plaintiffs suffered internal bleeding, which led to hospitalization or death, according to court documents.

Bayer alleged that Janssen — who had the responsibility of conducting and managing the trial — did not inform the company about the Covance program.

The German company told The BMJ it “expressly contradicts with the allegation that Bayer would have withheld safety data from drug regulators and the safety monitoring board of the ROCKET AF trial.”

In addition to the trial-data controversy, a new study suggests that Xarelto is less effective and safe than Pradaxa (dabigatran). Boehringer Ingelheim, the drug’s manufacturer, also faced thousands of lawsuits because of the drug. It paid $650 million to resolve 4,000 lawsuits about bleeding in 2014.

The 2016 study conducted by David J. Graham and colleagues and published in JAMA Internal Medicine raises concern that Xarelto is associated with increased bleeding and mortality compared to Pradaxa in patients with atrial fibrillation (AF).

“In this large direct comparison of patients with AF treated with dabigatran or rivaroxaban, rivaroxaban use was associated with statistically significant increases in the risk of intracranial hemorrhage and major extracranial bleeding, including major gastrointestinal bleeding, and possibly with increased mortality in older patients or those with higher baseline risk of stroke,” Graham and colleagues concluded.