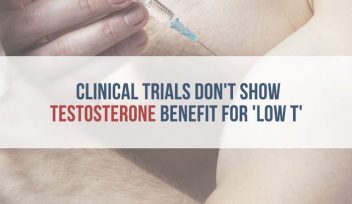 Researchers at Georgetown University collected data that suggests testosterone replacement therapy has no beneficial effect on health conditions. The 2016 study analyzed 156 randomized control trials from 1950 to 2016 that compared testosterone to placebo for sexual function, mood or cognitive function and cardiovascular health.

Testosterone therapy critics say drug companies marketed drugs such as AndroGel and Testim based on theoretical claims and appealed to otherwise healthy men who wanted to delay the aging process. There is little evidence that the drugs work, and studies have yet to prove their safety.

“Testosterone products are marketed for non-specific symptoms associated with normal aging, but testosterone is not a reasonable treatment for aging,” study co-author Adriane Fugh-Berman, a pharmaceutical marketing researcher at Georgetown University Medical Center, said in a press release. “Testosterone has known risks and no clear benefits, and shouldn’t be used by men with intact testicles.”

Fugh-Bergman and colleagues are not the first to raise concerns about the Low T drugs. In 2014, consumer watchdog group Public Citizen petitioned the FDA to add a black box warning for cardiovascular risks.

Dr. Sidney Wolfe, founder of Public Citizen’s Health Research Group, published an article in The BMJ detailing the side effects of the drugs and the number of men at risk. Wolfe told Drugwatch he blames the FDA’s lack of action on “the dangerously close connection between the FDA and the [drug] industry.”

He also points out that out of about 27 studies on testosterone therapy. Out of these, only those funded by drug companies showed no evidence of risk. In contrast, independent studies showed a risk of heart problems.

“Testosterone has been marketed to improve a number of conditions but for the vast majority, our review of the data shows that not one of these claims has adequate clinical trial support,” Fugh-Bergman said in a press release.

Testosterone Side Effects Lead to Lawsuits

The safety of testosterone replacement therapy is still in question, and a number of studies linked the drugs to heart attacks, blood clots and strokes. In March 2015, the U.S. Food and Drug Administration warned that these drugs may increase the risk of stroke, heart attack and death in men taking them.

Now, more than 6,000 lawsuits are pending in federal court before Judge Matthew F. Kennelly in the U.S. District Court for the Northern District of Illinois. The suits allege manufacturers failed to warn of the risks.

In early September 2016, Judge Kenelley signed an order selecting four stroke and heart attack claims to head to bellwether trials in 2017. The outcome of the cases may influence thousands of pending cases. About 5,000 of the cases name AndroGel’s manufacturer AbbVie as the defendant.