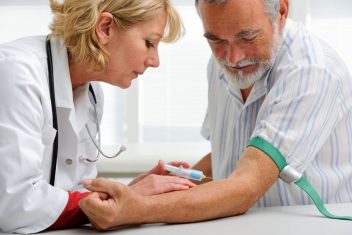 A clinical trial of men with low testosterone (Low T) showed those who used AndroGel had greater coronary artery plaque buildup than those who did not.

The trial is one of seven conducted by the National Institutes of Health (NIH) designed to test the safety and effectiveness of testosterone-replacement therapies such as gels or injections. Researchers published their findings in the February 2017 issue of the Journal of the American Medical Association.

The randomized, double blind-study involved 170 men with an average age of 71 who had age-related low testosterone. Trial participants had a high risk of cardiovascular problems and half had severe plaque buildup, or hardening of the arteries.

Of the 170 men, 138 completed the study. About half of the men received AndroGel and the remaining men received a placebo gel. Researchers followed the men for a year and found those who used AndroGel had 20 percent more plaque buildup than those who did not.

Doctors associate high levels of plaque with a greater risk of heart attack and stroke.

“Plaque progression is bad. There’s no mechanism by which this could be helpful,” he told Medscape. “I would be more cautious in patients who have already had a cardiovascular event or have significant atherosclerosis [and] tell these men that either we should forgo testosterone or use a much lower dose.”

Budoff said that objective may not be warranted, and he referenced studies with estrogen therapy in women which led to higher risk of breast cancer.

“Maybe once you’re 70, you don’t have to be 40 again,” he told Medscape. “It didn’t work out so well for women either in the hormone-replacement trial.”

Critics have accused companies like AbbVie, the maker of AndroGel, of promising older men the fountain of youth. Ads claimed testosterone therapy could increase vitality, improve sex drive and improve mood, among other benefits.

So far, previous studies done on testosterone replacement therapies showed lackluster evidence that the drugs have much benefit.

Dr. David J. Handelsman of the University of Sydney in Australia, who was not involved in the study, voiced his concerns about hormone therapy in the same 2017 issue of JAMA.

“Rejuvenation fantasies thrive on hope without needing facts,” Handelsman wrote in an editorial in JAMA. “Professional societies should revise guidelines that provide tacit, uncritical endorsement, which is too readily used for boosting testosterone as a panacea for male aging.”

Evidence of possible cardiovascular harm in previous studies led the FDA to add warnings for heart attack and stroke to the drugs’ labels in 2015. It also mandated longer-term safety and efficacy trials for off-label use of testosterone.

“If such a study proceeds, it could provide a valuable extension to the short-term safety of the T Trials supported by the manufacturers who have reaped large financial benefit from the boom in testosterone sales,” Handelsman wrote.

The possible link between testosterone and cardiovascular events led a number of men to file lawsuits after they claimed testosterone drugs caused strokes and heart attacks.

As of May 15, 2017, more than 6,000 federal lawsuits were pending before U.S. District Judge Matthew F. Kennelly in Illinois. Bellwether trials are set to begin in June 2017.

In the meantime, Budoff and colleagues say larger studies are needed to better understand how testosterone affects plaque buildup.