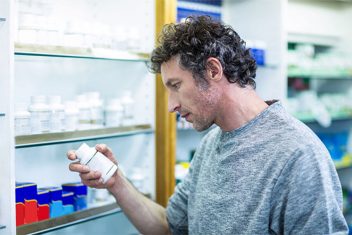 A cheaper, store-brand version of popular over-the-counter (OTC) heartburn medicine Nexium 24HR has arrived on store shelves across the U.S.

Michigan-based drug-maker Perrigo Company PLC announced it began delivering the first store-band FDA approved equivalents of esomeprazole magnesium on September 27. The Perrigo products are boxed as retailers’ own label and sold as a lower-priced alternative to the name brand.

Nexium 24HR is one of the biggest-selling over-the-counter treatments for frequent heartburn, with annual sales estimated at more than $300 million. Competition from a less expensive version could eat into profits for pharmaceutical company Pfizer, which has had exclusive rights to the OTC version of Nexium since 2014.

Both Nexium 24HR and the new store-brand equivalent are part of a class of drugs called proton pump inhibitors (PPIs), which also includes Prilosec and Prevacid. PPIs have been manufactured in prescription and over-the-counter versions for years. The U.S. Food and Drug Administration approved the first generic version of prescription Nexium in 2015, and Perrigo’s OTC store brand version in August.

PPIs: Risks from Being Over-Prescribed and Over-Used

PPIs have been criticized as one of the most over-prescribed and over-used drugs in the U.S. Some research has found that anywhere from 20 to 70 percent of people taking them had a form of heartburn the drugs aren’t meant to treat.

Studies have associated PPIs with serious complications including as much as a 20 to 50 percent increased risk of chronic kidney disease compared to people who don’t take PPIs.

The FDA has issued multiple warnings about other health risks of PPIs, including:

To reduce risks, the U.S. Food and Drug Administration says PPIs should not be taken for more than 14 days in a row unless under a doctor’s supervision. Label information for the new Perrigo store-brand shows each package contains a single, 14-day course of the drug. The Perrigo labels also list the FDA guidelines warning people should to wait at least four months before taking the next 14-day course.

Perrigo: A Multi-Billion Dollar Drug Company You may have Never Heard Of

Perrigo Company PLC originated in 1887 as a manufacturer of patent medicines in Allegan, Michigan. It was an early player in manufacturing store-branded products.

People who have never heard of the company may have purchased its products in the past. Perrigo’s website says the company is the “world’s largest manufacturer of OTC healthcare products…for the store brand market.”

Those products include cold and allergy medications, pain relievers and fever reducers, heartburn medications and smoking cessation products. The company also manufactures or markets generic prescription drugs in the U.S.

Perrigo’s U.S. executive offices are still based in Michigan, but it is incorporated in the Republic of Ireland and operates more than 100 facilities around the world. According to its annual report, Perrigo’s net sales more than doubled to nearly $5.3 billion from 2015 to 2016 following a series of acquisitions of other companies.