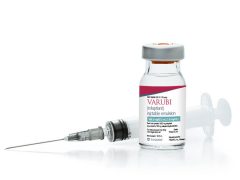 Varubi treats nausea and vomiting in cancer patients receiving chemotherapy. The FDA in January 2018 issued a warning about Varubi’s potential to cause serious allergic reactions. Lawyers are filing class-action lawsuits on behalf of shareholders. They may also investigate individual injury claims.

Varubi, a drug to treat nausea and vomiting after chemotherapy, has been linked to serious allergic reactions.

The medication, made by Boston-based Tesaro, comes in oral tablets and in liquid for intravenous use. The active ingredient is called rolapitant.

The U.S. Food and Drug Administration approved Varubi tablets in 2015 and injections in 2017.

On January 16, 2018, the FDA warned that Varubi may cause allergic reactions minutes after being administered intravenously. Some patients required hospitalization.

Tesaro sent a warning letter to health care providers in January 2018. Doctors administered about 7,000 doses of the IV drug from October 2017 to January 2018, according to Tesaro.

Since then, Varubi lawyers have started filing class action lawsuits for Tesaro shareholders. Tesaro knew the drug could cause allergic reactions and failed to disclose the risk, lawyers say.

Varubi works by blocking receptors in the body that play a role in vomiting and nausea. These receptors are called neurokinin (NK)-1 receptors.

(NK)-1 receptors are located in the brain stem. Varubi crosses the blood-brain barrier and covers the receptors. Doctors use Varubi with other medications to treat nausea and vomiting caused by chemotherapy.

Varubi belongs to a class of drugs called (NK)-1 receptor antagonists. Another drug in the same class is Emend, manufactured by Merck.

The most serious Varubi side effects reported are anaphylaxis and anaphylactic shock with intravenous Varubi. These are types of allergic reactions.

Less serious Varubi side effects may vary depending on the type of chemotherapy a patient receives. These may occur with oral or intravenous Varubi. Some are immediate, while others may surface later.

Anaphalaxis Symptoms Include:
Common Varubi Side Effects Include:

On January 16, 2018, the FDA released a safety communication warning that Varubi infusions could lead to serious hypersensitivity reactions such as anaphylaxis and anaphylactic shock.

Warning
Before receiving Varubi, patients should talk to their doctors about any potential allergies to the ingredients of the drug.

One of the ingredients in Varubi is soybean oil. People allergic to soybeans should tell their doctor before using Varubi.

Tesaro announced changes to the drug’s label to add this information on January 12, 2018.

Patients receive Varubi with other types of anti-nausea drugs. They receive the first dose two hours before starting chemotherapy on the first day.

For tablets, the recommended dose is 180 mg. For an injection, the dose is 166.5 mg in an intravenous infusion over 30 minutes.

The average cost of Varubi is about $560 for two tablets. Intravenous Varubi costs about $295 for one ready-to-use vial. The price may change depending on insurance plans.

Varubi stays in the body for seven days, longer than a cheaper drug in the same class. Emend, another (NK)-1 receptor antagonist, costs about $130 for one pill.

Varubi interacts with drugs that increase or decrease levels of an enzyme in the body called CYP2D6. Many antidepressants interact with this enzyme.

Patients taking thiorodazine or pimozide should not take Varubi. Taking these drugs together may lead to life-threatening abnormal heart rhythms.

Other drugs that may interact with Varubi include Prozac (fluoxetine), Paxil (paroxetine), tamoxifen and codeine.

People who cannot take Varubi may try other drugs to treat chemotherapy-induced nausea and vomiting.

For example, other drugs in the same class include Emend and Akynzeo. Other drugs for nausea include Taxotere, metoclopramide and chlorpropamide.

Other options used to control nausea are drugs that mimic the effects of cannabis. These drugs are called synthetic cannabinoids. These include Marinol (dronabinol) and Cesamet (nabilone).

These drugs have their own side effects. Patients should talk to their doctors before taking these medications.

Robert Bowers filed a class-action complaint in Massachusetts against Tesaro and some of its officers on January 17, 2018.

The complaint alleged Tesaro failed to disclose the risk of anaphylaxis and anaphylactic shock. This led to artificially inflated stock prices.

After the FDA released the side-effect warning, stock prices fell by about $4.07. As a result, “class members suffered significant loses and damages,” the complaint said.

Lawyers may also be accepting individual cases from patients who suffered anaphylaxis and anaphylactic shock after taking Varubi.