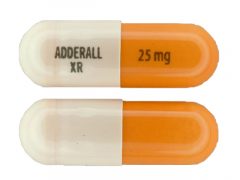 Adderall is a combination prescription drug that contains amphetamine and dextroamphetamine, two stimulants that affect the body’s impulse control and hyperactivity. The U.S Food and Drug Administration approved the drug to treat attention deficit hyperactivity disorder (ADHD) and narcolepsy.

The FDA approved Adderall in 1996, but it was originally approved in 1960 under the name Obetrol, a drug used to decrease appetite. The FDA approved the drug for use in ADHD without clinical trials testing its safety in children, according to a PLoS One review by Florence T. Bourgeois and colleagues at Boston Children’s Hospital and Harvard Medical School.

While the medication is FDA-approved for ADHD and narcolepsy, some medical providers may prescribe it for unapproved, off-label uses. These include treatment of depression, anxiety, bipolar depression and to help people lose weight.

Fact
Adderall may cause dependence, and it’s a controlled substance. Selling or giving away Adderall is against the law.

Because Adderall is a stimulant, working professionals and students may use it without a prescription to get more work done, to improve focus while studying or with alcohol to get high. It’s one of the most misused ADHD drugs. But misuse of this drug can lead to serious cardiovascular events or sudden death, according to the Adderall drug label.

This medication belongs to a class of drugs known as amphetamines, drugs that are highly addictive and listed as controlled substances by the Drug Enforcement Administration.

The most common Adderall side effects include stomachache, nervousness and decreased appetite.

How Does It Work?

The two active ingredients in Adderall, amphetamine and dextroamphetamine, work by affecting the brain levels of specific neurotransmitters — dopamine, adrenaline (also known as epinephrine) and norepinephrine.

The immediate release formula lasts about 4 to 6 hours, and the extended release lasts about 8 to 12 hours.

Fact
Adderall’s immediate release formula lasts about 4 to 6 hours and the extended release (Adderall XR) lasts about 8 to 12 hours.

Adderall is one of the most popular medications for ADHD. People with ADHD have levels of neurotransmitters that overstimulate them. Adderall used along with therapy can help dial down the stimulation to help them function better.

Several studies have shown Adderall is effective at treating symptoms of ADHD including aggression, disruptive behavior, impulsivity, inattention and hyperactivity-impulsivity, according to a meta-analysis in the Journal of Attention Disorders.

People with narcolepsy don’t have enough of these neurotransmitters to stay focused and awake. Adderall can help them stay awake throughout the day by stimulating the brain and mimicking the effects of neurotransmitters.

How to Take Adderall

The instructions on how to take Adderall may be different depending on the condition being treated, the formulation of Adderall (regular or extended release) and a patient’s age. Medical providers may adjust the dosage over time or occasionally stop treatment to see how effective the medication is.

Any missed doses should be taken as soon as possible, but a patient should never take two doses at the same time to make up for a missed dose. If it’s just a few hours until the next dose, skip the missed dose and continue with the next scheduled dose.

Fact
Avoid taking Adderall XR in the afternoon or evening because it can cause problems sleeping.

Starting dosages range from 5 mg to 20 mg a day, depending on a patient’s age and whether the drug is immediate release or extended release. The drug label does not recommend Adderall in children under 3 years old or Adderall XR in children under 6 years old.

Patients should take their medication exactly as prescribed, and should take it first thing in the morning to avoid insomnia. The medicine can be taken with or without food.

Adderall XR should never be crushed or chewed, but the capsule may be opened and sprinkled over applesauce. If taken with applesauce, it should be swallowed without chewing.

The medication label doesn’t recommend Adderall in children under the age of 6 for narcolepsy treatment, and Adderall XR isn’t approved for treating narcolepsy.

Adderall may interact with a number of medications and substances. This can cause side effects or cause medicines not to work as well.

This is not a complete list of all drug interactions. Before taking the drug, tell your medical provider about all medicines, vitamins and herbal supplements you or your child may be taking.

Drug labels don’t warn about interactions with alcohol, but some studies have shown dangerous effects from mixing Adderall and alcohol.

Because Adderall may make it more difficult to get drunk, people may drink more and suffer alcohol poisoning, according to the University of Iowa Hospitals and Clinics. It may also cause stress on the cardiovascular system, leading to high blood pressure and potential cardiovascular problems.

In one case study reported by Dr. Xiangyang Jiao and colleagues in the Journal of the American Board of Family Medicine, a 20-year-old man suffered a heart attack after combining Adderall XR and whiskey.

Adderall may interact with the following substances:

Who Should Not Take Adderall?

Don’t take Adderall if you or your child:

The FDA approved both Adderall and Ritalin to treat ADHD and narcolepsy, but Ritalin (methylphenidate) is an older medication. They are both highly addictive controlled substances. But each drug works a little differently and causes different side effects, and there are also slight differences in how effective they are.

For example, unlike Ritalin, Adderall also increases the release of dopamine, a chemical that increases the feeling of pleasure and reward.

Adderall has a longer, sustained effect at about half the dose of Ritalin, according to some studies. But Adderall’s absorption is delayed when taken with a high-fat meal.

According to Dr. Samuele Cortese and colleagues in The Lancet, Ritalin is the preferred drug for treating ADHD in children and Adderall is better for adults.

There are a few drug alternatives to Adderall for ADHD and narcolepsy. Stimulants such as Adderall are the first line of treatment for ADHD, but nonstimulants are also an option.

Talk to your medical provider about which one might be best for you or your child.