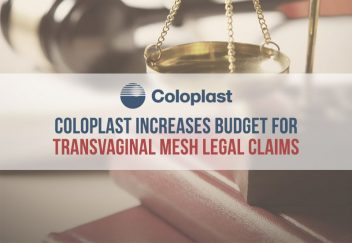 The provision is set aside to cover settlement and legal costs in the U.S. More than 2,000 lawsuits against Coloplast are pending in a multidistrict litigation court in the Southern District of West Virginia.

“We have been ordered by the judicial system in the U.S. to take preliminary steps towards actual litigation on 200 specific cases,” Coloplast president and CEO Lars Rasmussen said in a press release. “This means that our costs in relation to the litigation will increase. As a consequence, we have found it necessary to increase our provision.”

“Going forward, we do not wish to disclose the number of claims against Coloplast because of the confidentiality of the current settlement negotiations,” Rasmussen said. “But with the knowledge available to us today it is our best estimate that the 4.5 billion (Danish crowns) will cover the total costs of all claims.”

More than 80,000 lawsuits in six MDLs were filed against mesh manufacturers. The plaintiffs claim the devices, used to treat pelvic organ prolapse and stress urinary incontinence, injured them. Manufacturers agreed to settlements or lost verdicts resulting in more than $1 billion in payments to victims during the past decade.

The increase in the budget provision hampered Coloplast’s financial outlook for the fiscal year. The company issued its third profit warning to investors in 2015 which decreased its shares seven percent, according to Reuters.

Nordic financial advisor Nordea advised its clients: “This amount exceeds our expectations, although we saw a risk of the outcome being worse than the initial provision.”

C.R. Bard was the last company to pay a major settlement, settling 3,000 cases for $200 million in August 2015. The settlement resolved most of the company’s remaining mesh lawsuits.

It’s unclear if Coloplast will use the multi-million dollar provision to settle cases or fight them. Thousands of cases against other manufacturers are still pending in MDL courts across the U.S.