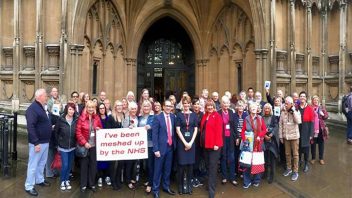 Kath Sansom with fellow Sling The Mesh members outside House of Commons in London on October 18, photo credit Harry Rutter

Despite a heated campaign by women harmed by pelvic mesh, Britain’s Parliament recently refused to ban the surgical device, ruling out a public inquiry or temporary ban.

The decision on October 18, 2017 drew criticism from members of Parliament and women injured by mesh — including women in the U.S.

Parliament did not ban the product or suspend its use because it contends pelvic-mesh complications are the result of implantation problems — not product defects, according to Jackie Doyle-Price, parliamentary under secretary of State for Health (Care and Mental Health).

Alec Shelbrooke, Conservative member of Parliament for Elmet and Rothwell, called the mesh scandal the “new thalidomide,” referring to a controversial drug that caused birth defects in thousands of children in the late 1950s and early 1960s.

“The latest UK study by seven medics reckons 1 in 10 suffer complications [from mesh],” Sansom told Drugwatch. “I think the government did not suspend the use of mesh because they fear litigation.”

Transvaginal mesh — also called pelvic mesh — is a flexible, net-like plastic implant. Surgeons use it to treat pelvic organ prolapse, a condition where organs sag into the vagina. They also use it to treat stress urinary incontinence, or leaking of urine after coughing or sneezing.

The mesh forms a hammock under organs and supports weak pelvic tissues or the neck of the bladder.

Although doctors consider mesh the gold standard of care for prolapse and incontinence, thousands of women have reported serious complications after the procedure. These include autoimmune disorders, organ perforation, severe bleeding, pelvic pain, pain during sex, recurrence of incontinence, bowel blockages and other problems.

In the U.K., at least 130,000 women had mesh implanted in the last 10 years alone, but the numbers are difficult to verify, Sansom told Drugwatch by email.

Thousands Affected by Mesh in US

Mesh-injured women in the U.S. are outraged about Parliament’s decision.

Janis Urban is one of thousands of American women who continues to suffer complications from pelvic mesh and now fights to spread awareness through social media.

“I think we need to have a revolution after the U.K.’s Parliament decision,” Urban told Drugwatch.

According to data provided by medical-device consultant Madris Tomes of Device Events, there have been nearly 114,000 U.S. Food and Drug Administration reports of injuries linked to mesh — including 1,152 deaths — since 2004.

Despite the ongoing controversy, reports of mesh complications in the U.S. have gone down dramatically since 2013. Several factors may have contributed to the decline, Tomes told Drugwatch.

“When transvaginal mesh was reclassified to Class III it may have affected physicians’ willingness to use it,” Tomes said in an email. “That would account for the decrease. Certainly there are a lot of attorneys taking mesh cases so that would deter patients from allowing their physicians to use it.”

Expert: Patients Should Seek Justice through the Courts

Advocacy groups in the U.K. and the U.S. seek a ban on pelvic mesh, but it may be difficult to achieve.

Dr. Hooman Noorchashm has been an outspoken advocate for women’s health since he and wife Dr. Amy Reed campaigned to spread awareness about power morcellators.

The FDA found the drill-like surgical device could spread undiagnosed uterine cancer. Reed died in May 2017 from cancer spread by the device after a hysterectomy.

“Pelvic mesh should be banned,” Noorchashm told Drugwatch. “It is used in an area that is prone to infection because of naturally occurring bacteria, and it is implanted by poorly trained surgeons.”

While he supports a ban, Noorchashm said it is not the job of Parliament or Congress to enact one. What the government should do, he said, is to allow an inquiry and ensure women have the right to file lawsuits against manufacturers.

Thousands of American women have already turned to the courts for justice.

As of October 16, 2017, the United States Judicial Panel on Multidistrict Litigation reported there were still over 42,000 active federal mesh cases. At one time, the number soared well over 100,000.

Despite the decision by Parliament, the mesh battle will continue in the U.K.

“The fight goes on to get a suspension, a public inquiry and eventually a pelvic mesh ban,” Sansom said. “Women suffering with mesh in the U.K. join should join Sling The Mesh, Scottish Mesh Surviors, Meshed up NI, Welsh Mesh Survivors or any of the other groups globally to get advice from women who understand and care.”