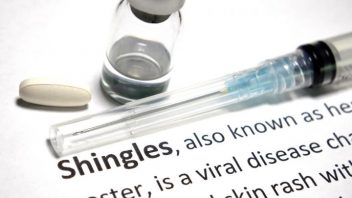 Major pharmacy chains have raced to make a new shingles vaccine available nationwide. The Centers for Disease Control and Prevention added Shingrix to its recommended vaccinations list in January. CVS said GlaxoSmithKline’s vaccine is now available in all 9,800 of its stores. It’s also for sale at 8,400 Walgreens and Duane Reade locations, their parent company says.

Shingles is a painful, blistery rash. It can last two to four weeks and cause nerve pain lasting months longer. Anyone who has had chickenpox can develop shingles later in life. About 99 percent of Americans 40 and older carry the chickenpox virus.

Their risk for shingles increase as they age.

The U.S. Food and Drug Administration approved Shingrix in October. It is only approved for adults 50 and older. The drug is almost twice as effective as the older Zostavax vaccine.

About one in three Americans will get shingles in their lifetime. But only about a third of Americans receive a shingles vaccine. Cost may be part of the reason so few get the shot. The Shingrix vaccine costs $280. Zostavax costs around $200. Federal law requires insurance plans to cover most costs for vaccines the CDC recommends.

The shots are less effective as people age. But Shingrix still showed an improvement over the older vaccine. Shingrix was almost 90 percent effective for people 70 and older. Zostavax track record has been 67 percent for people 60 and older.

People receive Shingrix in two shots. They should get the second one between two and six months after the first. People who have had the older Zostavax shingles vaccine should wait at least eight weeks before getting a Shingrix shot.

What the CDC Says

The CDC recommends healthy adults 50 and older get the new Shingrix vaccine. The agency says even people have received Zostavax should get it. The CDC also recommends it for anyone who has had chickenpox or shingles in the past.

The CDC said patients could treat most side effects with over-the-counter drugs. The results came from a clinical trial of 15,000 patients given Shingrix on four continents.