If you’re old enough, you may be familiar with the following scene: You are sitting in the waiting room of your physician’s office. Out of courtesy for the doctor’s schedule, you arrived a half hour early, but now your appointment time has passed. In fact, you’ve been waiting for more than an hour, and you begin to realize that the rest of your day is going to be jammed up.

You meekly protest to the office manager that you hadn’t counted on being there for such a long time. She politely tells you that there have been some unavoidable medical emergencies that day but that the doctor will see you soon.

Soon, the outer office door opens and a smartly dressed woman enters, carrying a large case. She smiles at the office manager and greets her by her first name. She is immediately ushered past you into the doctor’s inner office.

You return to your seat and flip through another six month-old magazine. You hear the muffled sounds of conversation from inside and perhaps some amused laughter. Fifteen minutes later, the smartly dressed woman emerges, waves goodbye to the office manager and scoots out the door.

The woman, if you haven’t guessed, was a representative from a pharmaceutical company. In her case were drug samples, some of which she left at each medical office on her route.

The free samples are for doctors to give their patients in the hopes that their next dose will come from a paid prescription, written by your friendly physician who, somehow or other, found the time to meet with the rep, while you continued to cool your heels in the waiting room.

These scenes play five days a week all across America – but not nearly as much as they used to. They are slowly fading from view.

At its peak, in 2007, the American pharmaceutical industry employed 102,000 sales reps, making constant visits to the country’s approximately 661,400 doctors.

That number is expected soon to drop by 25 percent as the era of drop-by visits by company reps recedes and as more doctors see reps by appointment only.

In addition, teaching hospitals and medical schools are responding to adverse publicity about the all-too-cozy relationship between Big Pharma and medical professionals by limiting contacts between their student doctors and any type of vendor, including drug companies and medical device makers.

Yet for years free drug samples were only part of the formula used by the pharmaceutical companies to influence doctors’ medical biases and prescription-writing habits.

Away from the office, a sales representative for a major drug company was expected to entertain doctors two or three nights a week, often by buying them tickets to expensive sporting events and treating them to dinners at five-star restaurants. In fact, gifts ranged from the mundane – pens and coffee mugs embossed with a new drug’s name, stuffed animals embroidered with a company logo and personalized stethoscopes – to the exotic: tropical vacations disguised as educational seminars.

Before the industry’s chief lobbying group, Pharmaceutical Research and Manufacturers of America, in 2002 pulled the plug, the open use of gifts and money to influence doctors was considered standard practice.

Drug companies deny that they are paying bribes to doctors for recommending their products and boosting their sales. They see their paid relationships with health care providers as beneficial to medicine and the public good.

“Interactions between biopharmaceutical research companies and health-care professionals play a critical role in improving patient care and fostering appropriate use of medicines,” according to Diane Bieri, general counsel for the Pharmaceutical Research and Manufacturers of America. 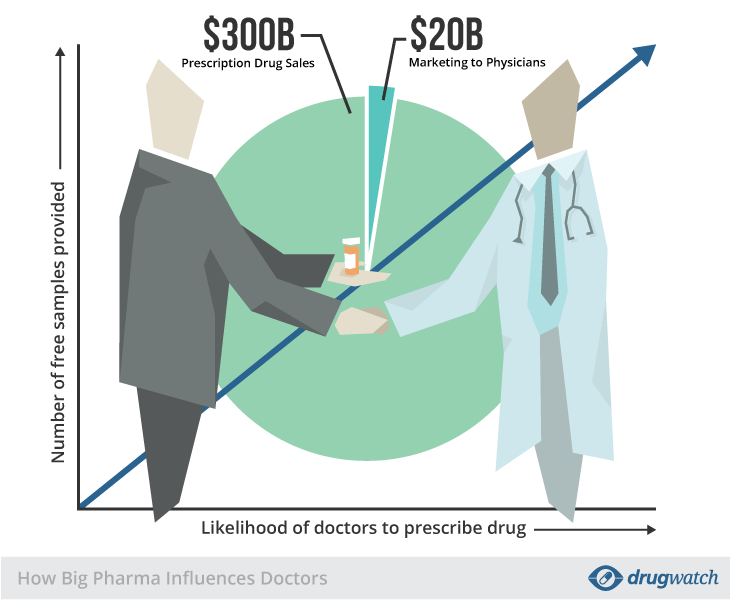 Drug companies say they merely inform doctors about the latest therapies devised by their research teams. Doctors, meanwhile, denied they were being influenced in any way by Big Pharma’s largesse.

Yet, two observations seem to refute both notions:

First, drug companies would not be so generous if their investments in giveaways did not net enormous returns. Pharmaceutical companies spend an estimated $20 billion a year on marketing to physicians, while prescription drug sales top $300 billion.

And second, several studies determined that doctors, like all human beings, are subject to the natural tendency to want to give something back to a gift-giver, in a dynamic psychologists call reciprocity.

In a 2000 article in the Journal of the American Medical Association, Dr. Ashley Wazana of McGill University in Montreal analyzed 29 studies on doctors’ prescribing behavior in Canada, Australia, New Zealand, Holland and the United States.

Wazana noted, among other things, that:

While the traditional practices of trying to influence doctors with free samples, assorted freebies and exotic vacations to have them prescribe more of their drugs have diminished in scope, Big Pharma’s inducements didn’t disappear. They merely shifted.

Today, if a drug company wishes to get a doctor to write more prescriptions, it will simply ask him or her to become a speaker – or, as it’s known in the trade, a “thought leader.” Tens of thousands of U.S. physicians are paid to spread the word about Big Pharma’s favored pills.

Recruited and trained by the drug companies, the physicians – always accompanied by drug reps – give talks to other doctors over small dinners (paid for by the company), lecture them during hospital teaching sessions and chat with them over the Internet. In exchange for hefty speaking fees, this new breed of drug company spokesperson typically must adhere to company written slide presentations and talking points.

Who are the doctors being sought as thought leaders for Big Pharma? The drug companies say they hire the most respected doctors in their fields for the critical task of teaching about the benefits and risks of their drugs and that their surrogates are chosen for their credentials and their credulity among their peers.

But a recent investigation by ProPublica, a non-profit corporation that produces investigative journalism in the public interest, found on company payrolls hundreds of doctors accused of professional misconduct and disciplined by state boards or one that lacked credentials as researchers or specialists.

For example, the Ohio medical board said Dr. William D. Leak performed “unnecessary” nerve tests on 20 patients. Some were given “an excessive number of invasive procedures,” including injections of agents that destroy nerve tissue. Yet the finding, posted on the board’s public website, did not prevent Eli Lilly and Co. from using Leak as a promotional speaker and adviser. The company has paid him $85,450 since 2009, even though the medical board voted in 2008 to revoke Leak’s license.

The Food and Drug Administration (FDA) in 2001 ordered Dr. James I. McMillen of Pennsylvania to stop “false or misleading” promotions of Celebrex, saying he minimized risks and touted it for unapproved uses. Still, three leading drug makers paid the rheumatologist $224,163 over an 18-month period to deliver talks to other physicians about their drugs.