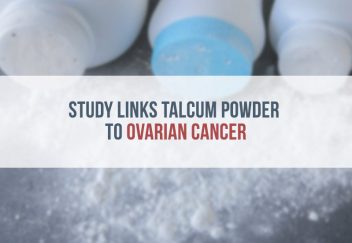 There is a significant link between women’s talcum powder use and ovarian cancer, researchers at a New York cancer institute reported.

Dr. Paolo Boffetta and colleagues at the Tisch Cancer Institute of Mount Sinai Hospital in Manhattan published their findings in the European Journal of Cancer Prevention. Researchers looked at 24 previously published statistical analyses and studies with data on more than 300,000 women with ovarian cancer.

Bofetta and colleagues found a “weak but statistically significant association between genital use of talc and ovarian cancer, which appears to be limited to serous carcinoma.”

“Overall, it is about a 20 percent higher risk for women who say they used talc, compared to women who say they did not use it,” Boffetta told Newsday. The researchers stress that the results cannot prove how talc causes cancer, however.

“We are guided by the science which supports the safety of Johnson’s baby powder,” J&J’s Tara Glascow said in a video statement.

Expert: Talc May Cause Ovarian Cancer in Thousands

During the trial of Deane Berg, Dr. Daniel Cramer — a Brigham and Women’s Hospital obstetrician and gynecologist — testified that about 10,000 women may develop ovarian cancer each year because of talcum powder. He published a study finding a 33 percent increase in risk of ovarian cancer linked to talcum powder.

Cramer’s 2016 study in Epidemiology suggests the hormones estrogen and prolactin may play a part in creating an inflammatory response to talc.

Since the 1960s, researchers observed a possible link between talc powders that contained asbestos, Cramer wrote.

The first study linking genital talcum powder use to ovarian cancer published in 1982. In 2006, the International Agency for Research on Cancer determined genital talc use was “possibly carcinogenic.”

But, there is still controversy over whether or not talc causes ovarian cancer. Experts say many studies are inconclusive.

One 2014 study in the Journal of the National Cancer Institute by Houghton and colleagues found no association.

According to Cramer, this study was flawed because it didn’t weigh the role of estrogen in increasing the risk for postmenopausal women.