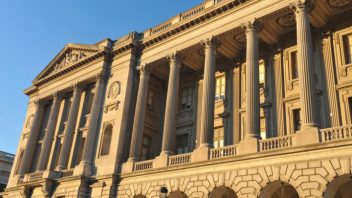 A Philadelphia jury ordered Johnson & Johnson and Bayer AG to pay nearly $27.8 million to an Indiana woman for failing to warn about bleeding risks associated with their blood thinner Xarelto.

It was the fourth trial of lawsuits over the blockbuster drug and the first time the companies lost in court. The three previous Xarelto trials had been in federal court as part of a massive multidistrict litigation (MDL) involving more than 19,000 lawsuits. Tuesday’s verdict came in a Pennsylvania state court.

The jury hit the companies with $1.8 million in actual damages for Lynn Hartman and her husband. Jurors tacked on another $26 million in punitive damages. Punitive damages are awarded to punish defendants when jurors determine those defendants’ behavior was especially problematic. Bayer and Johnson & Johnson had worked together to develop the drug.

“Bayer stands behind the safety and efficacy of Xarelto and believes there is no basis in fact or law for the verdict, including the punitive award,” Chris Loder, a Bayer spokesman said in a statement. The company, along with Johnson & Johnson, has promised to appeal the decision.

Hartman had taken Xarelto for more than a year before she was hospitalized in 2014 for gastrointestinal bleeding. She told the court she required four blood transfusions as doctors tried to figure out the cause.

Former U.S. Food and Drug Administration Commissioner Dr. David Kessler testified on Hartman’s behalf during the nearly month-long trial. He told the court that label warnings about Xarelto’s bleeding risk had been inadequate.

He testified that Xarelto won FDA approval in 2011 largely based on the results of the ROCKET-AF study. The study found only fewer than 4 percent of people globally given Xarelto experienced bleeding complications. But in the U.S., the number was more than twice that rate.

“It’s a clinically significant adverse event, it’s a demographic characteristic and it should be on the label,” said Kessler, who served as FDA commissioner under the first Bush and the Clinton administrations.

The FDA Adverse Events Reporting System (FAERS) public dashboard shows the agency has received more than 68,000 reports of serious complications associated with Xarelto, including more than 14,000 reports of gastrointestinal hemorrhage — the same complication Hartman filed a lawsuit over. At least 370 deaths have been directly attributed to taking Xarelto.

Xarelto Among a Class of Powerful Blood Thinners

Xarelto is part of a new class of blood thinners called novel oral anticoagulants (NOACs). The drugs are part of a new generation of drugs designed to replace warfarin, sold under the brand name Coumadin, to prevent blood clots. In addition to Xarelto, other NOACs include Eliquis, Pradaxa and Savaysa.

“Xarelto is the worst in class of the new blood thinners,” Michael Weinkowitz, Hartman’s lawyer, told Bloomberg in an emailed statement. “The serious health complications suffered by thousands of patients could have been avoided if physicians were properly instructed about the risks.”

Anticoagulants, including NOACs, are used to prevent blood clots that could damage the lungs or heart. But they can be associated with serious bleeding and it can make it more difficult for doctors to stop or slow bleeding. Unlike warfarin, Xarelto does not have an antidote that allows blood to resume clotting to stop bleeding.

Another NOAC, Pradaxa, has also been targeted in more than 2,500 lawsuits claiming its maker hid bleeding risks from patients and doctors. Manufacturer Boehringer Ingelheim GmbH paid $650 million in 2014 to settle most of those cases.

Hartman’s lawsuit was the first of more than 1,500 Xarelto lawsuits filed in a consolidated litigation in Pennsylvania state courts that have been centralized in Philadelphia. Another 19,000 lawsuits from around the U.S. have been consolidated in a multidistrict litigation in Louisiana federal court. In filings with the federal government, Johnson & Johnson reports the number of lawsuits over Xarelto has increased by more than 25 percent just this year.

Three previous federal trials ended in verdicts favoring Bayer and Johnson & Johnson. The most recent one wrapped up in August. Legal experts say Hartman’s win in state court keeps hopes of a settlement alive for people who have sued over injuries suffered after taking Xarelto.

Xarelto is Bayer’s best-selling drug, bringing in $3.2 billion in sales for the German company in 2016. It is Johnson & Johnson’s third-biggest seller, worth $2.3 billion last year.