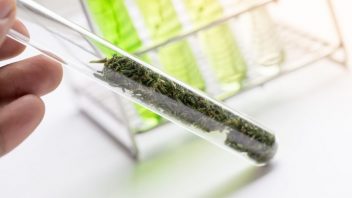 The U.S. may be mere months away from its first government-approved marijuana pharmaceutical.

The U.S. Food and Drug Administration is expected to rule by the end of June on an application from GW Pharmaceuticals for approval to market a drug called Epidiolex for the treatment of rare conditions of child-onset epilepsy.

Although there are synthetic cannabinoid drugs on the market, Epidiolex could be the first plant-based drug approved in the U.S. The three synthetic products approved for the U.S. market are Marinol, Syndros and Cesamet.

Researchers published a phase three study Jan. 24 in The Lancet finding Epidiolex effective for treatment Lennox-Gastaut syndrome (LGS), a rare, severe form of epileptic encephalopathy, or brain abnormality. This condition is difficult to treat. The drug is also targeted and being studied for treatment of conditions called Dravet syndrome, tuberous sclerosis complex and infantile spasms.

“Uncontrolled seizures significantly impact the lives of patients and their families and there is a tremendous need for new options in difficult-to-treat epilepsies such as LGS,” Philip Gattone, president and CEO of the Epilepsy Foundation, said in a GW news release. “This randomized, controlled clinical study provides positive evidence of the potential role of cannabidiol in reducing seizures and we are excited about the possibility of a new treatment option for LGS.”

Christina SanInocencio, executive director of the Lennox-Gastaut Syndrome Foundation, said, “Additional treatment options are desperately needed for patients who continue to struggle with uncontrolled seizures and these results offer much needed hope to those living with this debilitating condition.”

The FDA in December granted Epidiolex a priority review, a designation that a drug may advance treatment for a condition in which no adequate treatment exists. This designation offers a quicker path to approval than might otherwise be available. The agency review is expected by June 27.

The FDA review relates to the drug for Lennox-Gastaut and Dravet syndromes. Both conditions are severe, rare, epilepsy-related seizure disorders that affect intellectual development.

According to GW, the FDA has granted more than 260 patients access to the drug under a program that allows unapproved drugs for patients with life-threatening conditions and no other alternatives.

GW Pharmaceuticals is based in London and Carlsbad, California. The company was founded in 1998 and is focused on developing its proprietary cannabinoid products. The company has also developed another cannabis drug, Sativex, which has been approved in 30 countries outside the U.S., including 21 European countries, where it is used for treatment of spasticity due to muscular dystrophy.