Dollars for Docs: Companies that Pay Doctors the Most 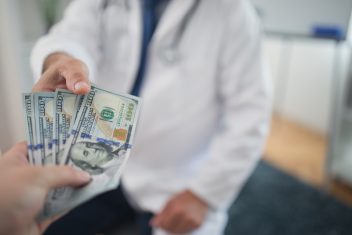 Bayer announced in July 2018 it was discontinuing its Essure birth control device. Less than a week later, news broke that the company had paid doctors $2.5 million since 2013. The payments were part of a marketing campaign to get doctors to prescribe Essure.

The payments were not illegal. They are direct marketing to doctors. And just about every drug or medical device manufacturer makes similar payments.

In fact, drug and device companies have paid doctors and hospitals more than $33.4 billion dollars since 2013, according to the Centers for Medicare and Medicaid Services (CMS).

Drugwatch looked at “Dollars for Docs” to find out which drug and device companies spent the most on payments to doctors. Dollars for Docs is a website run by ProPublica that uses CMS data to show payments made by 2,000 companies.

The list below highlights the seven biggest spenders and the products these companies spent the most money to promote. The amounts are totals spent from August 2013 through December 2016.

Genentech’s most familiar products include Xolair and the flu treatment Tamiflu. But other drugs topped the list of company spending.

Zimmer Bomet is one of the world’s largest makers of orthopedic medical devices. It has operations in 25 countries and sells products in 100. It made the list for its promoting of implants used for knee and hip replacement.

This Johnson & Johnson subsidiary manufactures hip, knee and other orthopedic implants. DePuy spent $15.7 million in about three and a half years promoting its Pinnacle hip. People have filed more than 9,700 Pinnacle lawsuits claiming the devices caused complications.

Michigan-based Stryker sells medical devices in 100 countries. Its products range from joint and spinal implants to surgical equipment. Orthopedic implants accounted for more than 38 percent of sales in 2017.

AstraZeneca makes the well-known drugs Nexium and Crestor. They are two of the most profitable drugs in recent history. But its marketing to doctors since 2013 has focused on newer products.

Pfizer manufactures big name prescription drugs such as Celebrex and Lipitor. It also produces over-the-counter and consumer products including Advil and Chapstick. Viagra is possibly Pfizer’s most famous product.

Allergan makes drugs such as Botox and AndroGel testosterone therapy. It also manufactures medical devices. These include the Lap-Band surgical weight-loss system and the Seri Scaffold.

Federal law requires drug and medical device companies to report payments. CMS tracked 53 million records between mid-2013 and the end of 2017. Payments were sometimes for services including talks, research and consulting fees.

Dollars for Docs shows some doctors have made millions off this arrangement. At least four doctors have racked up more than $50 million each in less than five years.

But the average payment was just $20 per doctor. This usually amounted to a company representative picking up a doctor’s meal.

A 2018 study in JAMA Internal Medicine found even a free lunch made doctors more likely to prescribe a company’s drug.

Find Out If Companies Paid Your Doctor

Patients can search for how much money their doctors received from medical companies.

The CMS Open Payments site has a search engine that breaks down totals for individual doctors or teaching hospitals. People can search by a doctor’s name and location.