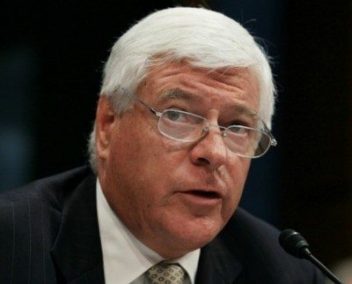 When Johnson & Johnson Chief Executive Officer Bill Weldon steps down next month, he will receive $143.5 million in retirement pay. Although Weldon is retiring as head of the health-products giant, he remains chairman of the Board of Directors.

The payout breaks down to an accumulated pension of $48.4 million, which Weldon will receive in monthly payments after he retires, and the remaining  $95.1 million he earned as deferred compensation during his 40 years with Johnson & Johnson, the company said in a statement filed with the Securities and Exchange Commission. Dow Jones reports that Weldon’s pension puts him in the top 10 percent of pensions for CEOs among S&P 500 companies.

Despite the amassed amount Weldon is due, his total compensation in 2011 fell to $26.8 million from $28.7 million the previous year, largely due to the company’s recall struggles.

Mounting Woes For the Products Giant

Johnson & Johnson has recalled more than two dozen product since September 2009. And the problems that have plagued the company under Weldon aren’t just recalls. The U.S. Food and Drug Administration (FDA) has warned the company about false statements it made about Listerine mouthwash in September 2010. And in April 2011, the SEC charged Johnson & Johnson with bribing doctors.

Consequently, consumer confidence has dropped and sales have suffered. The recalls have cost well over $1 billion in lost sales and triggered Senate and regulatory investigations, according to msn.com.

Still, Weldon received a $3.1 million annual bonus for 2011. That’s a 55 percent increase from 2010 that the SEC filing explains this way: “Mr. Weldon successfully managed our company through a challenging economic environment in 2011, marked by progress in stabilizing the business, while continuing to ensure our long-term success.”

Johnson & Johnson does acknowledge in the filing that the company faces upcoming challenges, and the board has put Alex Gorsky at the helm for a new era.