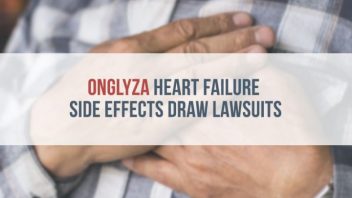 According to Wrendell Chester’s complaint for damages filed on Feb. 1, 2017 in the United States District Court for the Southern District of Texas, he took both Onglyza and Kombiglyze XR (saxagliptin and metformin extended release) between 2010 and 2015. After taking the drugs, he suffered congestive heart failure, heart failure and acute hypoxic respiratory failure — a condition where there is not enough oxygen in the blood.

Chester charges the defendants with negligence, manufacturing a defective product and failure to warn of the risks.

“Defendants acted in concert with one another to fraudulently convey false and misleading information concerning the safety and efficacy of Saxagliptin and to conceal the risks of serious adverse events, including heart failure, congestive heart failure, cardiac failure, death from heart failure and other adverse effects associated with Saxagliptin from the public, Plaintiff, physicians, and other healthcare providers,” Chester said in the lawsuit. “These concerted efforts resulted in significant harm to those treated with Saxagliptin, including Plaintiff.”

The FDA approved Onglyza in 2009 and Kombiglyze in 2010. The drugs belong to a class known as DPP-4 inhibitors that work to control blood sugar by helping the pancreas to produce more insulin after meals and reducing the amount of glucose produced by the liver.

The medications are popular because they don’t encourage weight gain like many other Type 2 diabetes treatments. Analysts say Onglyza could make as much as $2.47 billion annually by 2018.

A number of studies linked saxagliptin to serious side effects, and the FDA ordered AstraZeneca to include warnings on Onglyza and Kombiglyze XR’s labels.

In 2016, the FDA released a safety communication warning the public that medication containing saxagliptin and alogliptin may increase the risk heart failure, particularly in people with heart or kidney disease.

“FDA evaluated two large clinical trials conducted in patients with heart disease,” the agency wrote. “These clinical trials were also discussed at the FDA Endocrinologic and Metabolic Drugs Advisory Committee meeting in April 2015. Each trial showed that more patients who received saxagliptin- or alogliptin-containing medicines were hospitalized for heart failure compared to patients who received an inactive treatment called a placebo.”

In addition to heart failure, the FDA linked saxagliptin to pancreatitis and possible pre-cancerous pancreas cells in 2013. Then, in 2015, it issued another safety communication warning that DPP-4 drugs including Onglyza could increase the risk of severe joint pain.