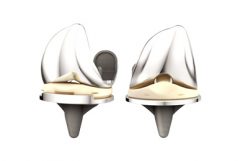 DePuy engineered its Attune knee replacement to be one of the most advanced on the market. But patients have filed hundreds of reports claiming that the devices loosened.

At least one study found an “unusually high” failure rate for Attune knee implants. The problem may stem from cement failing to bond components to the tibia – one of the bones in the lower leg.

The U.S. Food and Drug Administration has received hundreds of complaints about Attune knee problems.

Some patients have filed Attune knee lawsuits over complications they experienced.

What Is the DePuy Attune Knee?

One had a rotating platform design. The other had an anatomic patella — to replace the natural kneecap. DePuy claimed that the upgrades would improve range of motion and reduce implant wear.

What Is the DePuy Attune Knee Made of?

Attune knee replacement surgery lasts about two hours. The surgeon removes damaged bone and replaces it with the Attune knee prosthesis. Surgeons use cement to keep the device in place.

In the weeks before surgery, patients may undergo physical therapy. Their doctor may also put them on a weight loss program.

After surgery, surgeons will schedule follow up visits. The doctor will examine the knee replacement to see that it is healing and working as it should. Patients should let their surgeon know if they experience knee replacement complications.

DePuy Attune knee problems can include:

The study suggested that the problem was a failure of the cement to bond the implant to the bone. The study’s authors also suggested it was an underreported problem with Attune knees. They published their work in the Journal of Knee Surgery.

Revision Surgery
All of these conditions require revision surgery to repair or replace the knee implant.

How to Tell if Your Attune Knee Replacement Failed

Attune lawsuits are still in the early stages. There have been no court verdicts or publicized settlements yet. Attune knee lawyers are taking new cases.

Based on the number of reported failures, there could be hundreds of Attune knee replacement lawsuits. If that happens, attorneys may ask to combine them in a multidistrict litigation (MDL). MDLs let several, similar cases move more quickly through the legal process.

No Attune knee implants have ever been recalled. But in June 2015, DePuy recalled its Attune Knee Tibial Articulation Surface Instruments. Doctors use the instruments to implant Attune implants during surgery.

An FDA announcement reported that a small wire coil on the instruments could come off during surgery. If that happened, the coil could fall into the surgical site.

The part, called a Balseal, is small. Surgical staff might not notice it falling into the wound. There was a risk that surgeons might leave it in the patient’s body.

DePuy received FDA approval for Attune in December 2010. The FDA approved it through the agency’s 510(k) clearance process.

The process allows medical devices to make it to market faster. It lets manufacturers skip much of the FDA’s more strenuous approval process.

Attune Knee FDA Approval
To gain FDA approval, DePuy only had to show that the Attune knee system was “substantially similar” to a device already on the market.

DePuy manufactures several other knee replacement implants. This includes one product line that has been around since the 1970s.

DePuy’s Sigma Knee System is among the company’s most popular knee implants. DePuy introduced it in 1997, a year before Johnson & Johnson acquired the company. Doctors have implanted DePuy Sigma knees in an estimated 1.7 million patients.

DePuy introduced its LCS knee replacements in 1977. Surgeons implanted 700,000 of the devices in patients. The company expanded the product line in the 1990s and changed the name to LCS Complete. DePuy still uses components developed for the original design.